Rebecca “Faisão” was introduced to jiu jitsu in 2012 by her husband. She started her training and earned her blue belt under Paulo “Coelho” Brandao at Gracie Humaita Austin. In Texas she attended several incredible Girls in Gis events and saw the power of bringing women together to improve each other and jiu jitsu. After making the move to Seattle, she and her husband found a new home and family at Foster Brazilian Jiu Jitsu where she earned her purple belt under James “300” Foster. Outside of jiu jitsu, Rebecca is an Architect and preservation specialist in Seattle with a focus on restoration and rehabilitation of historic buildings.

“As a lifelong athlete and competitor I immediately loved the mental challenge and physicality of jiu-jitsu. When I started at the age of 30, I had no expectations. It wasn’t long before I was hooked. The community and competition is unique to anything I’ve ever been a part of. Through jiu jitsu I have found confidence and comfort with who I am. I feel honored to have met so many incredible men and women who share the same passion for jiu jitsu. The community of women in the Pacific Northwest is incredible and growing fast. I am excited to be a part of it.” 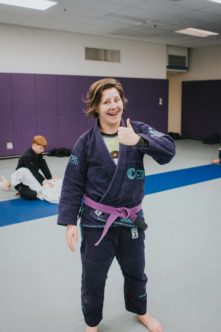 Lauren started training Jiu Jitsu in 2010 with her boyfriend at a student-led club at the University of Vermont under Vincent Guy, a Roberto Maia-affiliated Black Belt. She earned her blue belt from Roberto in 2013 and graduated with her degree in Mechanical Engineering the same year. In January 2015, she moved to Seattle for work and began training with Professor Marcelo Alonso in Wallingford. She received her purple belt from Marcelo in December 2016. Her boyfriend, who first introduced to the sport, received his black belt in December 2017, also from Marcelo. In addition to training with Marcelo, Lauren is an assistant coach for the Brazilian Jiu Jitsu Club at the University of Washington. Lauren loved BJJ but was frustrated by the lack of female training partners and low female attendance at tournaments. It was through another women’s jiu jitsu organization, Groundswell Grappling Camp, that she first had the opportunity to train with world-class women grapplers such as Hannette Stack, Emily Kwok, and Valerie Worthington. This experience changed her outlook on BJJ, and inspired in her the desire to support other female grapplers and female athletes in general. It was also through this Groundswell Camp that she met Ashley Freeman-Nguyen and learn about Girls in Gis, an organization that shares her goals.

Cynthia was introduced to jiu jitsu around 2014 after trying a women’s training course in Tacoma. She started under Marcelo Alonso and continues to train under his name in Tacoma, WA at Vital Jiu Jitsu. She went to her first Girls in Gis in Seattle at Gracia Barra and was amazed by the number of women participating, and all the higher belts she was able to meet and train with. Currently she assists a higher belt at her gym with a women’s only class, and hopes to encourage more women to try out the sport. Although not a frequent competitor, she has competed at NAGA, Revolution, and Submission Only in Auburn. She also trains muai thai frequently. Outside of jiu jitsu, she teaches middle school in Tacoma and lives with her husband, son, cat, and beagle.