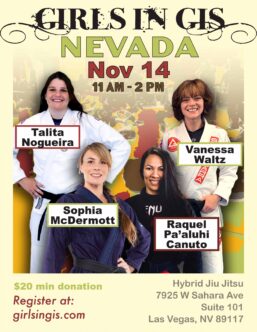 Are you ready Vegas? cause we’re rolling on in!

Doors open at 10:30 AM. Please arrive early so you have enough time to change and be ready when the event begins at 11:00 AM.

Sophia McDermott Drysdale is a 4 time Pan American Jiu Jitsu Champion, as well as the first female Brazilian Jiu Jitsu black belt of Australian Nationality. Regarded as one of the top grappling competitors of her generation, Sophia is also known for her work in the fitness industry, having developed several programs for women including her at home BJJ classes via Girls on Top.

Talita Nogueira, also known as “Treta” is a Brazilian Jiu Jitsu world champion and a black belt, who is regarded as one of the best competitors in the women’s medium heavyweight division of her generation. Treta solidified her name at the top of women’s Jiu Jitsu with her win at the 2011 World Jiu Jitsu Championship. She is also a professional Mix Martial Artist fighter having fought on the Bellator MMA promotion.

Vanessa Waltz is a Brazilian Jiu Jitsu black belt and co-owner of Gracie Barra Colorado Springs. She is an avid competitor and holds many F2W and IBJJF titles. She has been training since 2003 and a huge advocate of self defense as BJJ saved her life.

This event is open to women and girls of all ages and skill levels. No experience is needed. All participants must register online.