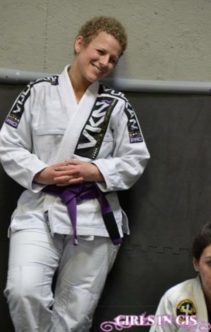 Amber began Brazilian Jiu Jitsu in 2009 in Wichita, Kansas.  She was introduced into the sport through supporting her husband and his team at tournaments. After gaining interest in BJJ she soon began training and it has been an amazing journey since then. Amber and her husband Chris Haines own the Wichita Jiu Jitsu Club in Wichita, KS for 9 years now. She loves to focus on getting more women involved in the BJJ community, and she currently runs the women’s program at her gym. She attended her first Girls in Gis event in Oklahoma City in 2013. Not long after attending she became a volunteer and now is an ambassadors for Girls in Gis Kansas chapter.

Amber is a true survivor in her journey, in 2015 she was diagnosed with triple negative breast cancer and had to take some time off from training. She believes that having amazing support from her friends and family in and out of the gym helped her beat cancer. She tries to inspire more women to train BJJ as she believes it can change your life in many positive ways. She believes she can reach her goals in spreading BJJ to more women through her work in her gym and as a Girls in Gis Ambassador.