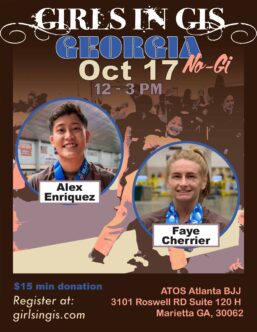 Doors open at 11:30 AM. Please arrive early so you have enough time to change and be ready when the event begins at 12:00 PM.

Faye Cherrier is a brown belt at Atos Atlanta Brazilian Jiu Jitsu. She was first introduced to BJJ 7 years ago by Muhammad Bilal. She began her martial arts training for self-defense purposes. Starting with Bangkok Boxing, but quickly transitioned to BJJ where she earned her blue belt in just a few months while also incorporating Muay Thai, and MMA classes. However after several concussions she decided to focus mainly on BJJ. Continuing on to earn her purple and brown belt from Professor Steve Mitchell. She is an avid competitor and has placed in IBJJF Pan Ams, IBJJF Worlds and first in the IBJJF Nationals and IBJJF No Gi Pans in addition to being an All-American wrestler Her goal is to win the World Championship as many times as she can.

Alex Enriquez began her BJJ journey in 2009. She is a brown belt at Atos Atlanta under Professor Bruno Frazatto. She also has six years of experience in wrestling at Cambridge High School under Don St. James and Life University under Ashley Sword and Christian Flavin. Among her accomplishments are being a multiple time IBJJF Pan American champion and Open class champion in both gi and no gi. Artemis Women’s Submission Series Pro bracket champion and the NFC female blue, purple and brown belt of the year. She is also a 3x GA Girls State champion, 3x Female High School All-American (Folkstyle & Freestyle) and WCWA All-American.

This event is open to women and girls of all ages and skill levels. No experience is needed. All participants must register online.