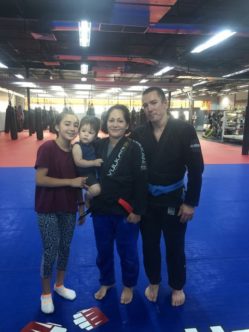 Monique “Moe” Travis
Monique “Moe” Travis has been training Brazil jiujitsu since 2008 at Knuckleup Fitness.  Moe has been a personal trainer, kickboxing, and CrossFit instructor for the past 11 years.  She is a wife and mother first. Her whole family trains BJJ as well. She has a 13-year-old daughter, a three-year-old little boy and is currently pregnant with their third child ( a baby girl).
She originally started training  Muay Thai in 2007 to lose baby weight after having her first daughter.  She became obsessed with learning and perfecting her skill set.  She started winning at the amateur level and felt unstoppable. In 2008, her boss convinced her to try BJJ.  After her first class, she realized she knew nothing about defending herself on the ground.  Jiujitsu humbled her. Moe was competitive, for many years, in both martial arts. She went pro in Thai after having an undefeated amateur record of 13-0 and winning multiple world titles. Bjj did not come easy to her.  She had to work very hard to achieve the black belt rank. She was the first female promoted to black belt at her school.
She is honored to be a Girls in G is ambassador. Moe wants to empower all the women she comes in contact with, and Girls in Gis have the same moto.
“The only advice I can give is don’t quit because you think you are not good enough. You will learn as you go. It’s amazing to watch females I train with go from scared, shy white belts to a feisty, fierce, strong woman. Bjj will expose your weaknesses very fast.  By facing your fears and addresses this weakness, you become tougher and stronger mentally and physically.  Girls in Gis is an amazing way to meet very like-minded women.  Girls in Gis  also allowed me to teach my first event as a black belt.  I hope all women can get out there and attend at least one event to see what I am talking about.”

Jennifer Moree has trained BJJ since 2016. She was introduced to BJJ and several other martial arts through longtime friend-become-husband Josh Moree, who owns and teaches at Evolution X Martial Arts & Fitness in Atlanta. Their dojo is a second home to Jen, her husband, and three children. The family trains a variety of styles of martial arts together including BJJ, Ryukyu Kempo, Kyokushin, Small Circle Jujitsu, and Modern Arnis. Jen is also an avid fan of kickboxing for fitness and weight training for strength and health. She also teaches kids martial arts and supports women locally by holding free monthly women-only BJJ open mats to encourage more women to train.

Though she recognizes BJJ is challenging, she loves the resilience she has built through persistence and regular training. She realizes it’s rewarding to overcome the physical and mental challenges in BJJ. It provides exceptional growth and strength as a person, something that makes its way into many other aspects of life.

More than anything, Jen loves the community and what martial arts can do for people from all walks of life, and is particularly passionate about women’s involvement in martial arts. Being that women are usually a minority in the arts, she feels it is important to find ways to connect, uplift, empower, and support each other in every way possible. That made the connection with Girls in Gis a perfect match for Jen! Girls in Gis helps her share the benefits of BJJ with others as well as strengthen the bond with her local community of women. Jen would love to be the person that helps remind women of how strong we are and how capable we are of conquering the challenges that life throws our way.

Gretchen started jiu jitsu in September of 2020 when one of her good friends and gi professor at Compound Fitness asked her for the 100th time to try his class. She finally did and was instantly hooked. She saw how it impacted her confidence and level of fitness and fell in love with the community. She also started to no gi in April of 2021. She looks forward to bringing more people, especially women to the sport.