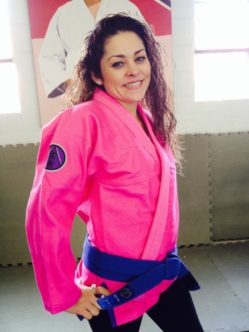 Natalie started her Brazilian Jiu Jitsu journey at Colorado Brazilian Jiu Jitsu Stapleton in 2013. She is a purple belt. Her daughter started training at the academy and Natalie really enjoyed watching her daughter learn and the happiness training BJJ brought her.  With some encouragement, Natalie took her first BJJ class and there was no going back, as Natalie fell in love with everything about Jiu Jitsu.

In her own words: “I love Jiu Jitsu because you learn who you really are. Nothing is more powerful then believing in yourself. Self defense is very empowering. Jiu Jitsu has reinforced my own self worth. Jiu Jitsu teaches me my life is worth fighting for. At the end of the day, everyone can benefit from training. It not only works your body, but it works your mind and spirit. Jiu Jitsu helps you to be strong physically and mentally. The women I train with inspire me and I inspire them. We can support each other to be the best we can be. As women we must rely on being technical in order to be effective. I want to be the best I can be. I Love being a Coach to my little teammates. Nothing makes me prouder then seeing one of my little mates execute a technique. Each one of them I feel I have a very special bond with because of Jiu Jitsu. I believe we lead by example. I want to help support as many of my teammates  as I can through Jiu Jitsu!”

Sharicka was looking for something to stave off the bulge. An athlete throughout her life, she was looking for something challenging. Her husband enrolled them both in Brazilian Jiu Jitsu in July of 2012. Sharicka began her journey at the Kompound Training Center in Littleton, CO where she is currently a brown belt.   Sharicka has been a champion of women getting involved in Brazilian Jiu Jitsu and building a women’s community of support and friendship. Her passion is seeing female beasts on the mat and provoking their hunger for competition.

“There isn’t a feeling more unadulterated than standing across from my opponent knowing it is me or her; knowing that she knows my struggle as well as I know hers, and knowing that she wants this as much as I do. Be fast, be first, be victorious.” 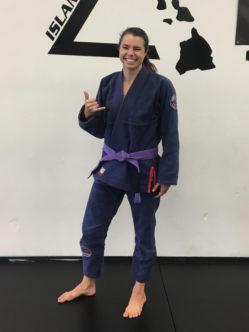 Kim started her Jiu Jitsu career in 2013 under the instruction of Andy and Mike Main at Pure Mixed Martial Arts in Denville, NJ.  For Kim, it was love at first choke.  She had always been an athlete, but nothing had captivated her like Jiu Jitsu.  Kim’s favorite part about Jiu Jitsu is the movement that is created between two people, like that of dance partners.  Shortly after receiving her blue belt, a move required Kim to transition to another gym.  She recalls it being scary to leave, but in the end, was grateful to have expanded her Jiu Jitsu family, had the opportunity to train under Marcos Duarte and Abraham Awad at SubForce in Lyndhurst, N.J and met her favorite female “dance” partner.

In 2015, Kim moved to Colorado where she began, and still remains,  training at Easton Training Center – Denver under Amal Easton and Eliot Marshall.  Shortly after, Kim attended her first Girls in Gis event where she was greeted by the largest, most friendly group of women training Jiu Jitsu than she had ever experienced.  Kim showed up not knowing anyone, but left that day with new friends and training partners.  Those relationships have continued to grow as she has attended more Girls in Gis events and feels fortunate to be part of such a wonderful female Jiu Jitsu community.

In June 2016, Kim received her purple belt and a few months later was teaching for the first time at a Girls in Gis event.  Kim is passionate about sharing the knowledge she has gained through Jiu Jitsu, but had previously dismissed the idea of teaching because it didn’t seem tangible at an academy where there were so many experienced upper belts.  With the support of members at Easton Training Center, Girls in Gis and Women Grow, Kim decided to teach a monthly self-defense class called Highly Aware which is geared towards beginners and hopes to inspire others to begin their own martial arts journey. As a Girls in Gis ambassador Kim wants to contribute by helping to build and strengthen the female Jiu Jitsu community alongside her fellow Ambassadors.