Skip to content
Home » Blog » When the Competitor Becomes the Teacher 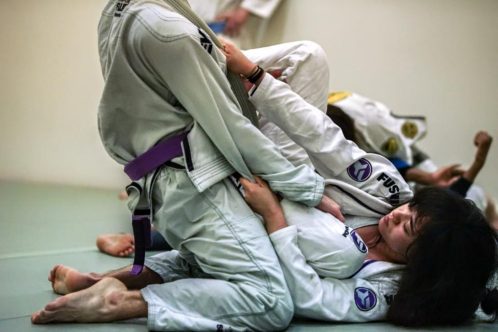 To say that Samantha Faulhaber, a four-time World Jiu-Jitsu Championship finalist, is an accomplished competitor is an understatement. Faulhaber, a Philadelphia-based black belt with Gracie Humaita, started off in jiu-jitsu as a competitor, but she later found her passion in teaching.

Faulhaber has trained and taught around the world, including in Maryland, California, Australia, and Norway. The black belt, who also went to the Abu Dhabi World Professional Jiu-Jitsu Championship after winning the San Diego, California trails, now teaches functional range conditioning at Move Well Philly.

Jen Hall, who is one of the co-hosts at the Girls in Gis Special D.C. Event on May 20, interviewed Faulhaber to chat about traveling, competing and training.

You’ve lived all around the country and traveled to many academies. What were some of your favorite to visit?

Outside of my homebase at Gracie Academy Philadelphia, some of my favorites I’ve visited are Unity in New York and the jiu-jitsu community in the area of Raleigh-Durham, North Carolina. Unity because they just want to train hard and produce good people on the inside and out. Their kids reflect that.

I name that whole general region of North Carolina because the people in that area produce top-level competitors, and yet have a ton of respect and fun while they do it. It seems like the group of academies down there play and train hard but somehow manage not to have many politics between gyms in the process. If you want to know where to go to train in that part of North Carolina, ask Jeff Shaw who runs the Dirty White Belt radio podcast. I did my first seminar at Jacob Whitfield’s academy, Triangle Jiu Jitsu. Later, I did a superfight with black-belt Caitlin Huggins at a fundraising event down there.

Gracie Humaita has been one of the most successful women’s teams in all of jiu-jitsu. What has it meant to you to represent them?

It’s very cool and also a little odd sometimes. Leticia Ribeiro is extremely accomplished and the senior black-belt female on Humaita, so people generally assume that you train under her if you’re a good female on Humaita [Laughs]. Leticia has been great to me but I can’t count her as my teacher!

I’ve gotten to meet some great competitors as a member of the team and got to close out an all-Humaita podium at purple belt Pan Ams one year. Mackenzie [Dern] choked me in the final. Jena Bishop was third and her match with Mackenzie that year was crazy.

As an athlete for Gracie Humaita, your teammates and coaches have been some of the most decorated female competitors in our sport. What has training and fighting alongside the likes of Mackenzie Dern, Penny Thomas, Leticia Ribeiro, and Beatriz Mesquita been like for you?

I’ve only gotten to train with the heavy hitters of Humaita a few times: at two of Leticia’s women’s camps, and once when everyone came together at Humaita headquarters in San Diego. Bia [Beatriz Mesquita] did give me one of the worst beatings I’ve ever had when she was a black belt and I was a purple belt. It was very impressive [Laughs].

You have competed consistently throughout the years. What motivated you to focus so greatly and invest so much in pursuit of your goals?

Jiu-jitsu just became what I did. Even though I compete less now I feel closer to the sport because I have a more balanced life for me. I think anytime you start to identify with something it gets a little rocky. Now I let things flow.

I was probably the most in shape in some respects when I was a blue belt because I did a lot of kettlebells then, but I also knew nothing about diet or proper rest and wouldn’t recommend those strategies now. Today I encourage people to get professional coaching to learn about diet and recovery if they want to be a high-level competitor and also want to do this stuff forever.

My warmups have changed with my knowledge of the human body and I no longer stretch. Instead I actively engage my muscles and nervous system. I am afraid of missing them calling my name on the loudspeaker, so I don’t use headphones, but I get a happy fun song in my head and go out with that in mind. If you’re not mostly enjoying yourself I don’t think you should do it.

During your travels, you’ve had the opportunity to train with many different women, as well as many of the top men’s competitors and coaches in our sport. Who were some of your favorite training partners?

I met some of my toughest training partners for sure when I was living in San Diego.  Regis’ wife at the time, Ana Carolina Vidal Lebre, was an absolute monster. Her guard passing made you pray she would pass faster. It was very inspiring. She and Jennifer Recinos and Tracy Leung taught me the meaning of head control and dynamic movement. I got so much better training with them.

I also met Kate Wilson from Australia while living in California. She gave me the opportunity to train in Oz … and her tenacity and vigor for training was on another level.

I miss Tonya Mininger a lot. We got our purple belts together back when Maxercise was a thing in Philadelphia. She’s off saving the world and stuff now and that’s great. But I still miss our half guard battles.

One other, who has been one of my most consistent death match partners for the longest, is a small purple-belt named Frank Garrett in Philly. I really think small, purple-belt men are a smaller woman’s (or really an entire academy’s) best friend. Junny Ocasio from Unity fits that description, too. Technical, fierce, and not so much bigger than we are. Valerie Worthington helped me prep a ton for my Fight to Win debut last month and I ended up successful.

You meet so many awesome people through the years. 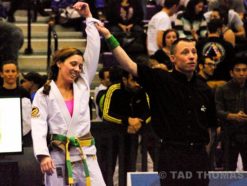