Skip to content
Home » Blog » The Woman Behind The Times 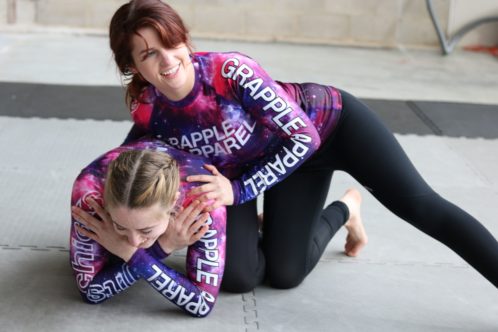 Jiu Jitsu Times has quickly become one of the top news sources in the Jiu Jitsu world. We read an article, watch a video, and catch up on the latest trends, but have you ever stopped to think about what makes this all possible?

She describes herself as “a mess,” but not necessarily a bad kind. She relates to Jackson Pollock paintings — a bunch of splatters everywhere that some truly appreciate while others don’t. Through the years she has learned to accept that.

“I guess I’m still creating the person that I “am,” and I’m really grateful for everyone who’s been a part of that process so far and has been patient with all my ups and downs.”

Clements is a self-proclaimed “word nerd” who has a weird obsession with spiders and Disney princesses.  She too, of course, also enjoys recreational strangling. Clements got her start in writing for the MMA & Jiu Jitsu world in her 20’s largely because of the encouragement from others.

“I started writing for a few “viral” websites just for the heck of it (My first-ever sample article for a website was about Ronda Rousey’s first UFC fight), and then I met fellow JJT writer Emil Fischer at a jiu-jitsu tournament one weekend. When he learned I was a writer, he suggested I reach out to Kitt Canaria, who owns the JJT, and try my hand at jiu-jitsu writing. That was about three years ago, and I’ve stuck around ever since.”

Clements’ Jiu Jitsu journey began in 2012 while living in Costa Rica.  She was nearly sexually assaulted by a taxi driver.  The very next day she signed up for a kickboxing class to get fit and learn self-defense. However, when introduced to Jiu Jitsu by a former boyfriend, she found Jiu Jitsu more appealing.

“The practical aspect of it appealed to me, but it was also just plain fun. I felt like a kid again, just rolling around on the ground and seeing what weird stuff my body could do. I eventually dropped kickboxing and MMA entirely and just stuck with BJJ.”

Through all of Clements’ world traveling adventures, from Costa Rica, back home to Pennsylvania, and now to Adelaide Australia, her love and passion for the art of Jiu Jitsu and writing has followed. Outside of Jiu Jitsu and writing Clements regards herself as “pretty boring,” We beg to differ. Her lifelong love of horses has nurtured her compassionate side. Her desire for adventure, her bravery and ability to take risks, has led her down a less traveled path around the globe. Her enjoyment of reading and creative writing alongside her passion for Jiu JItsu lead to her success at Jiu Jitsu Time.

But when you’re traveling the world, riding horses, strangling people and cranking out article after article how does one find balance?

“Honestly, I struggle to be able to juggle work and training and relaxation, and the result is that I’m usually super focused and dedicated on training or work, and then the other one falls to the wayside or becomes mentally or emotionally harder to handle. Then, of course, when I force myself to relax, it’s not actually relaxing because I’m stressed about all the work I could be getting done. Writing is a great career and I’m so lucky to have it, but it’s also mentally draining; if I have a bad day, it can make it so much harder to produce the ~10 articles a day I need to create between all my writing jobs. Then, of course, jiu-jitsu is hard and exhausting, especially when techniques and general athleticism don’t come naturally. I know that’s probably not the uplifting, encouraging answer people want to hear, but, you know, social media is kind of a highlight reel, and I think it’s important to be honest about the reality that happens behind the scenes. It’s hard! And that’s ok!”

In this day and age when everything is public, instead of running from her struggles, Clements has chosen to find strength in vulnerability.  Her openness has not only helped her overcome her own struggles but many others too.

“I used to try to hide my struggles or flaws, but since I’ve started writing about them, it’s been a huge weight off my shoulders. I’m comfortable with who I am and the mistakes I’ve made along the way that have brought me to this point. I’ve had people try to use my flaws or ‘secrets’ as weapons against me in the past, trying to shame me or get the upper hand on me. Now, I put that stuff out in the open anyway, so if someone wants to bring it up or use it to try to badmouth me to someone else, who cares? The feeling I get when a reader messages me thanking me for being open about a low or embarrassing point in my life because it helped them feel less alone is well worth it.”

Brazilian Jiu Jitsu is one of the fastest growing sports out there and has endured some serious growing pains. When in the thick of covering all the ins and outs of the Jiu Jitsu world, you really get a different perspective. We asked Clements what the biggest change is she would like to see happen in the art/sport.

“I might ruffle some feathers here (which is crazy to me, honestly), but I want everyone to stop defending the creeps and predators in jiu-jitsu just because they’re good at jiu-jitsu. There are SO many people in leadership positions in the art that shouldn’t be, and if you take a step back from that, there are a lot of big-name athletes who either don’t believe the stories about the predators or just sweep it under the rug and continue to train with them. If someone has credible accusations of violence or otherwise predatory behavior, I want people to not invite them to their gym for seminars. I want those people to be blacklisted by the community. If there’s a legitimate risk of someone preying on vulnerable people, I don’t want that person to be in a position of power (like coaching) or to be able to build a career in a sport that could lead to them choking another person or breaking their limbs. We try to publish the stories in which the accusations end in a conviction, but obviously, we have to be careful about sharing accusations that don’t result in official charges.

As for what to do about it, I feel like a lot of men (and even a lot of women) don’t realize what an epidemic this is in the community.  But I hope people start speaking up and at least make their teammates, friends, and coaches aware of potentially problematic people. If you see a promoter booking a problematic athlete on their card, at least let them know what you’ve heard. They might have brushed off one person’s concerns, but if they get fifty people from one city expressing their discomfort, they might reconsider. If you know a coach has a history of beating their partner or perving on students, let people in your circle know. This is a combat sport, and we need to protect each other.”

There is no doubt that Clements’ efforts will leave a lasting impact on the Jiu Jitsu world. Her dedication and contributions have not gone unnoticed. As far as the legacy she wants to leave behind, she is most certainly on the right path to achieving her goals.

“I just want more people to train. I’ve gotten messages from people who have said that they’ve read something from me that convinced them to pack their gear and go to the gym even though they wanted to stay home, and that’s the best thing in the world to receive as a writer. Jiu-jitsu has brought so much to my life, and I want it to give that to other people, too.

I also want to help boost women’s involvement and coverage in competitive jiu-jitsu. I’ve been told by a lot of people (though thankfully never by my boss at the JJT) that people just don’t care about women’s jiu-jitsu. Our numbers show that’s just not true. The media tells people what is worth paying attention to, and as we’ve published more and more stories about women in jiu-jitsu, our female readership has skyrocketed. How do you expect people to care about women’s jiu-jitsu if they don’t know who the athletes are? We get stories about Gordon Ryan and Buchecha sprayed all over our timelines, and that’s fine, but I believe more people would care if outlets started putting that same energy into promoting female athletes as well. It also communicates to women that this is a competitive athletic endeavor that they can pursue instead of signing up just for the purpose of learning self-defense.”