Skip to content
Home » Blog » The New Kid On The Block 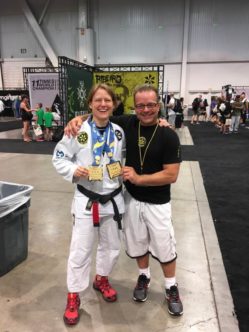 When it comes to finding a Jiu Jitsu academy the process can be frustrating and it may take you a few tries to find the right one. It can also be scary and intimidating to walk into a new academy and be the new kid on the block. What if you had to do it seven times? Jen Whitcomb is no stranger to this process.

Whitcomb began her Brazilian Jiu Jitsu journey fourteen years ago. She says she was looking for a way to stay involved in martial arts without having to drive almost two hours to continue training Taekwondo. After watching a Brazilian Jiu Jitsu class she decide that it was exactly the right kind of challenge that she adores. In 2016 she was promoted to black belt at Badger Style Jiu-Jitsu by Chris Blanke in Toledo, Ohio . Ironically Whitcomb now drives almost two hours for Jiu Jitsu.

When Whitcomb isn’t on the mats or commuting to class she is working as a Analytical Chemist Quality Manager. She says balancing work and training is always a challenge. However she has made it work. She commutes to class three times per week and while there she makes the best of her time on the mats by staying focused and present. The other days of the week she tries to stay active and get lots of rest, but often times ends up working longer days in the office.

Who is your BJJ idol and why?

My jiu-jitsu idol… I don’t know if I have just one. I love the heart the Hannette Staack brings to the mats, and Emily Kwok’s technical skills and eye for detail. Penny Thomas and Jessica Ross were the only high ranking women (they were purple belts when I started) I had ever met until I was a purple belt myself. I’m also incredibly grateful to the women who paved the way for my generation by competing in mixed belt classes and over/ under weight classes for so long and showing everyone that women have a place on the mats (DC Maxwell, Felicia Oh, and so many others). And the countless friends who have come up alongside me – we’ve all been through so much as the only women on the mats – I look up to them as much as anyone else for sticking with their journeys.

What are your Jiu Jitsu goals?

When I first started, my goal was to have fun with competitions and prove the statistics wrong by eventually earning my black belt – there were very few women training/ competing and even fewer at the higher ranks (purple belts were rare, and black belts were unicorns, especially here in the middle of the country). The goals now are to continue competing as long as I’m able and start teaching more. Eventually, I’d like to teach regularly and maybe even run an academy. The competition goal just requires the time commitment and desire to keep testing myself, along with the realization that Masters competitions are my best option considering my obligations at work. As for teaching more, I’m love to help my teammates when I can, and I’m able to run a Women’s only class once in a while – plus there are Open Mats and Girls in Gis events.

The greatest challenge I’ve faced on the mats has actually been related to all the relocations I’ve done with the family. Although I’ve been extremely lucky to find a new training home with great people every time we move, those moves always require several months of “starting over” – not in rank, but in learning the style and preferences of the new academy/ team as we get to know each other. It’s incredibly sad to leave teammates and friends and can be tough settling into the new group, but I’ve realized that everyone everywhere respects effort and a willingness to learn. So you just keep showing up, giving an honest effort, and staying patient with yourself and the “new” jiu-jitsu that’s coming your way.

With having to move around a lot and adjust to different academies what has helped you most in starting over each time? Do you have any advice for others?

Every time I start in a new academy, it’s hard – you’re new, you’re out of your element, and, especially as a woman, your rank may be questioned or doubted. What has helped me most is remembering all the hard work and time I’ve dedicated already – I refuse to waste that effort by quitting. And because I know I am capable of working hard, I know I can continue that moving forward with my new teammates and instructors. It’s hard to remember when you’re trying to settle into a new group, but be patient with the process and focus on enjoying the new turn in your path. Jiu-jitsu hasn’t changed, just the people you see in class. My advice is to cut yourself some slack, and suspend any expectations of your training other than “I will be consistent in my efforts and attendance” – anything beyond that creates added pressure on yourself and your new training environment. 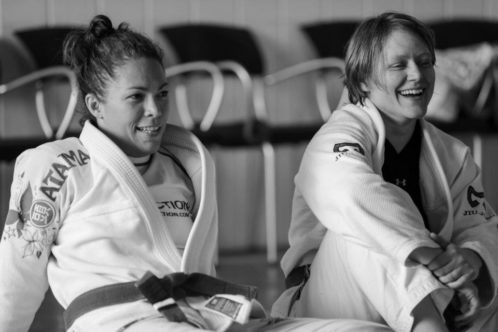 What has been the biggest difference in each academy you have trained at? Is there any similarities?

Through my years of training, I’ve been a student at 7 different academies due to relocations or instructors needing to hand students off to someone else in order to take care of their lives off the mat. I’ve also been lucky enough to be a guest at many more academies through camps and friendships. The biggest differences I’ve seen between all my training experiences come in two areas: 1) the formalities expected on the mats, and 2) the warm-ups. Some schools are traditional – bowing onto the mats, lining up by rank to bow in and out of class, using “Professor” for all black belts in the room. Others are much less so – everyone respects each other but uses first names regardless of rank, no bowing, lots of music and chatter. And other academies fall somewhere in between those two extremes. Warm-ups at each academy really just match the personality of the instructors – some are filled with hard-core fitness, others use technique drills with a partner or to move up and down the mats, a couple have used light flow-rolling, and a few places move straight into the jiu-jitsu topic for the day without warm-ups or stretching.

The biggest similarity through it all has been the respect shown to all students who display an honest effort to learn and a willingness to attempt the techniques being shown with an open mind.

How have you chosen each academy? What helps you find the right academy for you?

When it comes to choosing a new academy with each relocation, that open-mindedness has been necessary because we haven’t always lived in places where there are several choices (even though my ability to train is a consideration every time we move). My many “homes” have allowed me to make incredible friends that have become family, and they’ve given my jiu-jitsu a wonderful “accent” that is uniquely mine. As for choosing a new academy, I’m willing to meet instructors and students of every level and even try a couple of classes at almost any academy, but there are some ground rules:

1. Safety first – so I tend to stay away from “fight club” atmospheres by sticking to academies that focus primarily on gi training. Accidents happen because this is a martial art and a contact sport, but, if there are any malicious attempts to injure me or scare me off, and we’ve got a problem that WILL be fixed somehow.

2. If it’s not fun, why bother? I have a full time job & things off the mats that can be stressful, just live everyone, and I don’t need more hassles coming at me from something I choose to do in my spare time. I made a promise to my husband when I started training (no, he does not train, nor is he interested – this is my thing) that when this amazing, crazy, intense thing that I do stops being fun overall (everyone has a bad day, so that doesn’t count as not fun) that I would quit. I’m still here over 14 years later.

3. Proving myself through technique is fine, but being expected to tough out rough rolls to show I belong on the mats is NOT. As I’ve moved up in rank, I’ve become more aware of the energy in the room and the intent of my training partners. New women who arrive at an academy with higher rank (usually purple belt and up) than some guys are used to seeing may get an even bigger target on their backs disguised as an attempt to “verify” the woman’s rank… I used to think it was fun to prove my toughness to those guys, but, now, it’s just exhausting and I’ve outgrown that mentality, so I avoid those people and training environments. I know my strengths & the blood/ sweat/ tears I’ve given to reach this point in my life, so now I just want to train and improve my weaknesses with as little drama as possible.

4. Learn by drilling and training and competing. If that’s the plan at your academy, we can work out the rest of the details. I just want to come in, spend some time with you and your team testing myself through constant learning, and help you do the same, then go home happy and tired because I worked hard.

If you could change just one thing in BJJ what would it be and why?

If I could change just one thing in jiu-jitsu, it would be to have everyone understand the joys of having “family” from all associations and teams. I think it’s already improving, but there still just aren’t enough women out there that we can afford to buy into the mind-set of some of the politics that happen. Yes, be loyal and respectful always, but do so with an open mind for learning and understand that there are other paths.