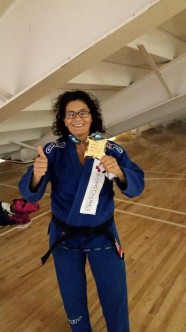 Five unbelievable women began a legendary journey culminating with Profesoser Yvone Magalhaes Duarte becoming the first female blackbelt in October of 1990.  They have inspired us, they have connected us, and they have been an integral part in the success each and every woman has had in the Brazilian Jiu-Jitsu (BJJ) realm.  Professor Yvone Magalhaeus Durate started a journey that ultimately brought us outstanding role models such as, Leka Vieira, Hannette Staack, Leticia Riberio, & Luciana Dias.  These 5 women of distinction all contributed to the foundation of BJJ for women by staying the course against insurmountable odds.  Each woman carved out a path even she could not have possibly forseen.

Professor Luciana Dias (Judo/BJJ) is one of the fabulous original firsts that remind us why female pioneers in BJJ have absolutely helped make things from pay, to expanded divisions, to even the level of hostility a whole lot easier for female practitioners today.  Thanks to Dias and her peers things may not be where they should be, but they have come a mighty long way. 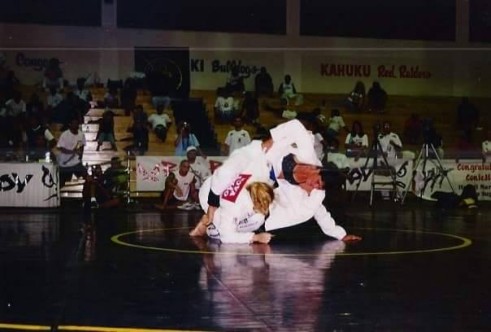 Like soccer, BJJ is big in Brazil and when Luciana “Luka” Diaz began BJJ, she didn’t see any obstacles because she was a woman, she transitioned from Judo to BJJ as so many in Brazil do. At the beginning  BJJ was always fun and challenging.  In Brazil more women practiced BJJ however, in the USA it was different because there were not many women at the time.  She always wanted to do martial arts since she was a little girl.  Her mom was the only person in the beginning that tried to stop her from pursuing BJJ because it was “a boy thing.”

Luka always knew women’s BJJ would become what it is today.  “Women are very competitive and love challenges we can do many tasks at one time so BJJ teaches you that too.  BJJ was getting popular in the 90’s, few of us were on the mats battling and then respecting one another (most of the time after the match).  Soon more and more were starting to get into the academies to train, compete, and today we are huge in the sport, and I love it.” 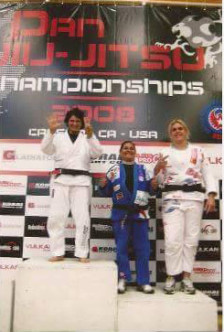 She had no problems sticking with BJJ when she began her journey.  For Luka, it was her lifestyle and still is. At the time BJJ was her workout,  her discipline,  her relaxation,  her focus and her anti-stress besides helping her defend herself.  She never saw BJJ as a hostile at all, she always  saw BJJ as a challenging  art that helps you go through  life in all aspects.  An art that she picked  to endeavor her goals and to go through her obstacles.  Fortunately,  she loves to compete and that kept her focused and she wanted to be a black belt so she followed through and achieved her ultimate goal on March, 27th 2003.

Training BJJ for some woman is about empowerment, that was never the case with Luka.  She was always full of self-confidence and direction off the mat.  Training only reinforced that, and after spending time on the mat she developed more of an awareness of her surroundings both off and on the mat.  She is still a competitor (2014 Master’s 2 Open Class Champion), and has no plans to stop. 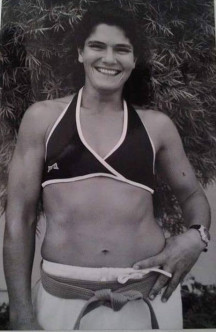 Luka thanks BJJ for helping to promote a healthier body image for many of its practitioners.  The flexibility, strength, and weight loss are all factors that keep many on track.  A distraction for some in such a distinguished career can be wives/husbands or boyfriends/girlfriends.  Luka has a take on distractions that many probably share.  “Well circumstances will be different for each  person, in my case I never had problems with a boyfriend because I was doing BJJ, the best thing to do is to find someone that does BJJ as well. Otherwise, what will be your choice in the end, BJJ or boyfriend?  Me, BJJ for sure.”

When it comes to BJJ your Academy is your 2nd home and Luka assists with running her 2nd home by teaching the kids and beginners classes with her husband Wellington “Megaton” Dias. 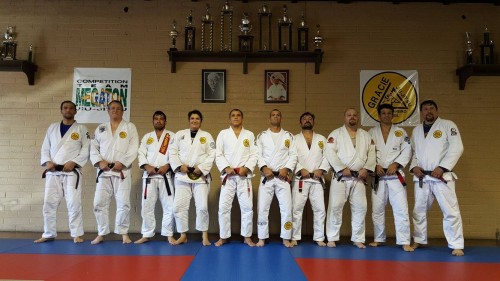 After training for almost 30 years it is very difficult to remain in the same place (with the same affiliation depending on your circumstances) and teammates do come and go.  Luka is not the exception to this experience.  In 1999 she moved with Megaton to Phoenix (her husband and professor) which forced her to change Gracie Affiliates.  This move resulted in a loss of teammates, which in Brazil is known as CREONTES (disloyalty).  In the US, Americans move for many reasons but they probably have absolutely nothing to do with BJJ.  However, hopping from one affiliate to another in the US (like Brazil) is not well received.

If you have the attention span of a fruit fly training for 5 minutes might seem daunting.  The mental and physical toll that it has taken on Luka has been truly remarkable and she is still in it just like she began yesterday.   Looking back on her fundamentals, Luka would like to have focused more on drills and control vs. submission.  “I have done BJJ since 1986 so 29 yrs training,  I’m 53 yrs old so my lower back and neck take a hit.   I’m in  PT constantly with laser at my sponsor Biomechanics.  I’ve had 2 knee surgeries.  So now at this point, the harder that I train, when I get hurt it takes 2 weeks to recover  kkkkkk.  My parts are damaged kkkkkkkkkkkk” 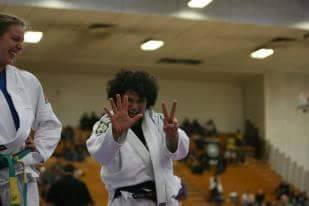 When Luka moved to the US, she met her biggest BJJ challenge in an American practitioner by the name of Kathy Brothers who was an up and coming blue belt back in 96.  Her fellow Brazilians  Leka, Hannette, and Leticia were competitors she aspired to be like.  All these years in such a non-conventional, yet combative sport for a woman has been gratifying for Luka because of the success she has had as a woman alongside her peers.  She has been able to do what she loves for going on 30 years with relative ease simply because she enjoys it.

Even the things we love can bring us some MAJOR challenges.  In 2003 Luka attempted to drop 6lbs in 1hr so she could compete against someone she admired (Leka Vieira) at Pans.  She did indeed lose the weight, and the match by sweep in the final moments.  That day came with a loss and a gain for Luka.  She may have lost the match but she gained a black belt.  She credits receiving her black belt on the podium along with seeing her stepdaughter Mackenzie Dern receiving her black belt (December 1, 2012) as her proudest moments throughout these years. 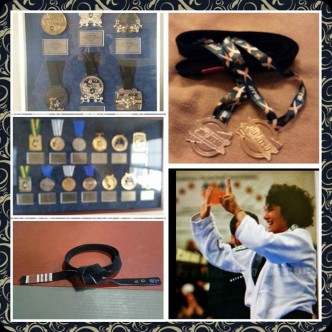 Professor Luciana Dias is part of a core group of female black belts that are responsible for a female revolution in BJJ.  She is personally responsible for many of the American black belts that came to pass.  “I feel very humbled  to say that I was part of that revolution together with so many others great BJJ female warriors.  That little group of females (Cindy Omatsu, Felicia Oh, Kris Shaw, Gazzy Parman, Kathy Brothers, DC Maxwell, Susan Arbogast, and Jocelyn Chang) that I started  teaching at the Machados and today I see them as black belts representing the art that I chose  for my life makes me so proud of them because they stuck together with all the odds the same way I did.  All of you girls caught me by surprise and I didn’t know that I would make such an impact on all of you, I’m very happy, humbled, surprised, and I’m extremely proud of each of you.”

“I picked BJJ for a martial art, it is not always easy,  but hard work pays off in the end. Be HUMBLE  to yourself, and to others.  Don’t let fame and medals go to your head.  Never mistreat teammates or opponents.  Respect  your sensei and high belts.  Never do to others what you don’t want done to you.  Never forget the ones that taught you your first lesson, who gave your basics, never forget your old instructor, operate like this and you will go far.  My legacy is to continue  teaching  the gentle art passing my knowledge  to the ones willing  to learn.  My legacy is to get my red belt if God will permit that.  My legacy is to pass on what my sensei passed to me BJJ all the way I believe 110%.” 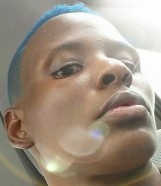