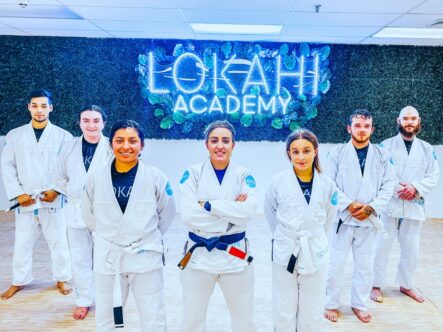 Female black belts are still a rarity in our sport, and it is even more extraordinary to find a woman who is the owner and head instructor of her own BJJ academy. Juliana Fontoura gave me a peek into the rewards of instructing and gym ownership, as well as how being a female in leadership sets her academy apart.

Katie: What first got you into BJJ? When did you first start training?

Juliana: My brother used to wrestle in high school and in the off-season he would take jiu jitsu. I was 15 going on 16 when I started in 2011.

Katie: At what point did you begin thinking about academy ownership?

Juliana: I know this is going to sound crazy… but 3 months into doing jiu jitsu I told myself, this is what I want to do forever. Obviously there was a lot of criticism–people saying, “You’re never going to make it,” but I’m pretty hard-headed when it comes to stuff like that. When someone tells me I can’t do something, it makes me want to do it even more.

Katie: Tell me about when you first started coaching and owned an academy–and now, opening your new academy, what is your vision for the future?

Juliana: I opened a school with my ex-husband in 2013–I was a purple belt and started teaching a women’s class. So I already had experience with gym ownership. I opened my new gym, Lokahi, in February of this year, and had to close in March due to Coronavirus restrictions.

Now I am the only instructor, but I plan to keep it that way for the time being. I fully enjoy teaching, and everything that happens during the day goes away when I am coaching.

The office part of owning a gym is stressful. There is a high dropout rate. I have structured my classes to lessen that.

In our fundamentals class, you don’t get to free-roll. I have specific rolling drills related to the technique that they learn in class. For example, if we learn mount escapes, the partners will start in the bottom mount and practice escaping. Then they switch top & bottom positions. I found that people get hurt less in this more controlled environment, and once they get to actually live rolling in intermediate class, they are good to go.

Katie:: You mentioned starting out coaching women’s-only classes, and now you are the head instructor for all of your students. Do you feel you have support being a female head instructor? There are so many female coaches out there, but it’s rarer to have a woman as the gym leader.

Juliana: The students walk in and my face is everywhere–my medals are there and I’m in my uniform. Now that everything is open, I thought people wouldn’t want to train with me, especially guys… and that’s not the case. I actually had an all-guys class the other day. I have a good amount of women, and now I’m starting to have more men signing up. But I find women are way less hesitant to come into a mixed class when there’s a female instructor. I think they go in… and they think she did it… I can do it.

Juliana: I had a girl that came to visit one of our schools, and she was like, “Wow!  I’ve never seen a female black belt before, or rolled with one… can I roll with you?” I was like, “Of course!”–and I’ve been there before.

I met Hillary Williams who is just a badass–when I was a white belt. I think if I hadn’t met her so early on in my jiu jitsu career, things may have been different. If I didn’t already think I could do it before; after I met her, I knew that if she did it, I could do it too.

Before Corona I would hold women’s open mats all the time, and definitely will be starting that up again once we’re able to.

Katie: Obviously, being a female owner sets your school apart. What do you think you are doing that is different from other schools that you have experience with?

Juliana: I think the culture with a female lead is different. It’s not macho; there aren’t massive egos. I think many women who have trained have experienced a sexual assault or inappropriate behavior. When a female is in charge, how are you going to make those little comments that are disrespectful?

Being that authority figure as a female black belt changes everything. I have had so many girls message me asking how to handle a situation. I think every school should have female instructors, and they should be teaching regular classes, not just the women’s classes.

I think the culture right now is more accepting towards females doing jiu jitsu, but we have to break the other barrier, which is to normalize females teaching everyone. We are fully capable of doing it, and we have been training just as long.

When I get people telling me there’s no other girls training at their school, the first question I ask them is if they have a female instructor. always a no, and that’s the beginning of the problem. It’s intimidating for women to walk into a school with a bunch of sweaty dudes and no one they can immediately connect with. There are things females run into that guys will never… like, what if my tampon bleeds through my pants? Girls come together when stuff like that happens.

Katie:If you were to give words of wisdom to a female athlete who has their eyes on coaching or owning a gym, what would you say to guide them in that direction?

Juliana: The first thing I would say is to have the courage to do it because it is rewarding. Don’t listen to what people are going to say to you. They will degrade you or make it seem like you can’t do it. The first thing people asked me when I was opening my school is, “Is it only for females?” It made me so mad, because it’s not a fair question–would you ask a male coach if they’re only going to teach guys?

People do need to know that there is a difference between being a jiu jitsu athlete and being a jiu jitsu school/owner. If you want to be a jiu jitsu athlete, forget opening a school. You need to put yourself on the back burner for your school. A lot of people do not realize that when they plan on opening a school. If you want to compete, just compete–but if you like teaching and that is your calling, by all means do that. Once you get settled, you will be able to also train. I opened in February and mostly my students are white belts, so I don’t really have training partners that are at my level.

Break the barriers. The more we have female-owned schools, the more it will be normal, but we NEED the girls to do it. Bust your ass and make it happen. As a school owner for a while, I would say to start off small; don’t think too huge because you’ll have a massive overhead that you won’t be able to cover. Start small and build from there. And then be happy, do your thing, do jiu jitsu, teach jiu jitsu.