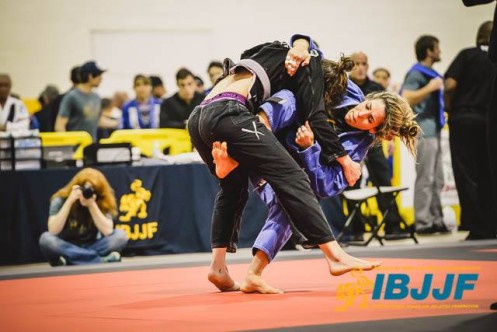 Girls in Gis is back in Katy Texas at Revolution Dojo on February 28th for another fun filled event. We had chance to speak with our host and guest instructor Veronica Mota-Messina about her personal journey and the many benefits she has experienced from BJJ. Veronica is a brown belt at Revolution Dojo. Seven years ago a friend brought her to a free trail class. Having seen improvement in her mind and body after training for a while, Veronica knew she was hooked. Veronica is a full time mom, house maker and gym owner. She does bill collecting for the gym and covers classes when need be. She also does some private lessons as well. Having a son with special needs (behavioral) it is imperative that she is available to him, his teachers, and councilors at any given time. In her spare time she loves to play and explore outside with her two puppies. She describes being in nature as “looking at gods perfect design reflected in nature”. She also enjoys picking new places to eat out and says eating her favorite things makes her feel happy. When she’s not on the mats or out in nature she likes to snuggle up and watch movies with her family at home munching on popcorn and peanut m&m’s. 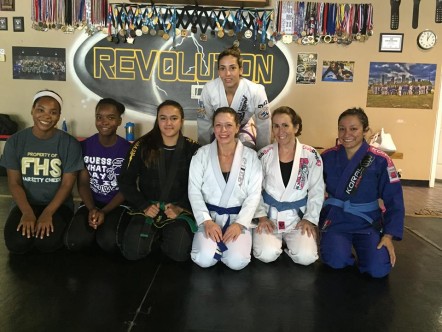 Revolution Dojo in Katy has had a strong female team. However Veronica says that for various reasons it has dwindled quite significantly. Revolution Dojo has some teen girls that are taking a break to do great things in wrestling at the moment. Revolution Dojo also has some little girls who Veronica says “blow my mind with their natural ability. They are so capable and driven! Future world champs for sure. I wish I had BJJ when I was a little girl.” Veronica finds pleasure in watching quite a few girls that started at the same time. She enjoys watching them grow from day one and help them when they need it. Veronica finds it satisfying to invest herself into someone watch them grow and bare fruit. She says it is such a personal thing to take someone under your wing, teach them what has taken you years to figure out on your own and then let them fly. She says it’s equally devastating to have someone just quit and never look back. She describes it “as a piece of you leaves, and you cant get it back. Its theirs to have forever and do what they will with it.”

Veronica says it is definitely beneficial to train with females regularly. Being the highest ranking female in her school she rarely has females that want to come by just to train with her. She says Gabrielle Mueller comes pretty frequently as well as Liz McCall. Veronica says its impossible to do well at a high level when a woman’s movements and reactions are unfamiliar to you. “We [women] move in a completely different way. We have a different kind of flexibility and the tenacity is on a different level during competition. There’s a veracity you don’t get from a man during training that a woman always brings to a fight.”  She says that sometimes she think its pure will and athleticism that gets her on the podium, but says of course its only Gods will that gets her there. She goes on to say; “I get out there and I’m like, holy crap, this is what women feel like?! Its scary. I want to just stop and ask, I’m sorry, did I say something to offend you? Perhaps I have attempted to kidnap your child or take your purse unknowingly.. HA HA! Just Kidding. but girls are another beast on the mat.” 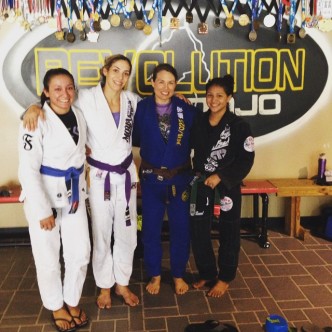 According to Veronica, BJJ is beneficial because its a great self defenses.that gives a self confidence and self awareness. You realize what you’re capable of, what you’re threshold for pain and intensity is and what your limitations are. She says BJJ is great for females because the movements and guards are dynamic and woman’s bodies have the capabilities to create very interesting games.

Her best advice for a newbie is to just jump right in. Don’t try and go the private route or even the girls only class route.  She says; “you will only learn by doing and sparring. Give it time and set small goals for yourself in each class. Keep it in perspective and don’t put too much pressure on yourself. It need to be your outlet not another job. Woman usually have at least three of those [jobs] already right.”

Like may of us Veronica has faced rough training from strangers or partners that don’t look out for her during sparring. She has had teammates accidentally injuring her. She has also experienced wear and tear on her body through hard training and suffered emotional break downs from the pressure she bestow on her self. Not to mention she suffers from bad anxiety. She used to take a lot of different pills but through BJJ, she now only takes medications when nothing else works. She would get panic attacks that caused her to hyperventilate and muscles starts to seize and cramp up. She says there have been times that she couldn’t speak because her face was all contorted from the cramps. 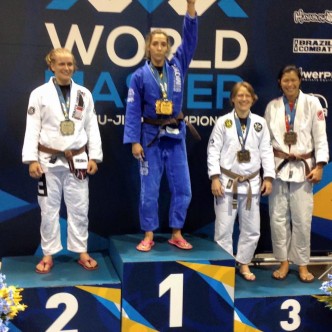 Uncomfortable social situations and over stimulus bring it on. She says a tournament is the perfect place to incite panic or anxiety for her. She says that she wants to run as soon as she gets to the venue. Hearing the yelling and feeling the energy can be very overwhelming, but she forces herself to deal with it. Throughout the years, she has tried different ways to cope with the tournament, from different types of music, breathing exercises,dynamic stretches, yoga,foods and consistent rituals. BJJ has forced her to cope with her demons and find ways that she can control them, not the other way. Says says because of BJJ she doesn’t have to push those demons down with pills or alcohol or distraction. She can fight them on the mat. Jesus, BJJ and my husband have been the best prescription. The only reason she keeps competing is that it has helped her get closer to conquering my demons. Although she is very successful she says she actually dislikes competing very much, but it helps her make small goals for herself that she can obtain each time. She fights and that’s how she keeps going.

Join us this weekend to meet and learn from Veronica. Info & registration at www.girls-in-gis.com/blog/girls-in-gis-texas-katy/ 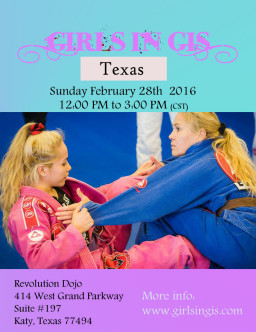