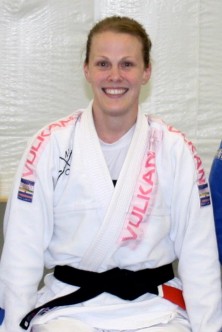 On April 2, 2016 Girls in Gis is hosting the first Girls in Gis Louisiana event. This event will be a very special event as you wouldn’t expect anything less in New Orleans. The event will take place at Triumph Krav Maga 2901 General DeGaull Dr Suite 201 New Orleans, Louisiana 70114 from 2:00 pm-5:00 pm CDT. This event is free of charge and open to females of all ages, skill levels and from all affiliations. No experience is required. We anticipate an amazing turn out as we have females coming from all across Louisiana and even three other states including Texas, Mississippi and Alabama.  We had a chance to sit down and chat with our host, Caroline Vanek. The first and only female black belt in the state. She had some amazing wisdom to drop on us and we are truly honored to have her a part of this event.

Caroline is not only a the only black belt in Louisiana, the first black belt and a huge part of NOLA BJJ, she is also a PE teacher.  Her life revolves around fitness and educating. In her spare time when she is not teaching or on the mats, she says she loves to run, to do photography, hang out with her dog, go to the park, travel, and hang with friends. In the last year, she has gotten in touch with the 80-year-old lady in her and has taken up embroidery.  She says she is actually pretty awesome at it.  When asked what is on her bucket list she says “I’d really like to get my butt kicked in Brazil.  I’d like to travel more and train at different schools.” 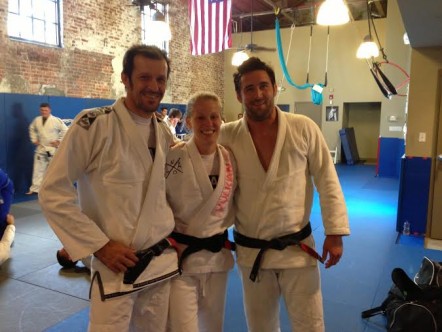 She has been training Brazilian Jiu-Jitsu for over 17 years, literally half her life. Her and her sister were taking a kickboxing class and their instructor said to her one day, “You’re really flexible.  You should try jiu jitsu.”  She had never heard of it, but wanted to check it out.  She went to my  first class and that was it.

“One of the awesome things about training that long is seeing and being a part of the growth and evolution of BJJ.  So many things have changed. For one thing, for the first several years I was the only female training in the area so it was just my guys and me.   There was no curriculum.  I was learning to do flying arm bars two months in.  At that point, I still was even sure what BJJ was exactly.  Most importantly, the significance and meaning of BJJ in my life has evolved.   It is a vital part of my life; I cannot live without it.   It has changed my life.”

She has seen much change over the many years she has been training in Louisiana. She says there more females training now in Louisiana than when she started, but still not a ton.  She says that she would like to see more women and girls training.  She says that another thing she’d like to see change is the politics.  By change, she means go away.  She says the gym is a place to get away from the negative things we all must deal with in life.  It is a sacred and safe place. Overall she definitely feels like the BJJ community has gotten closer. 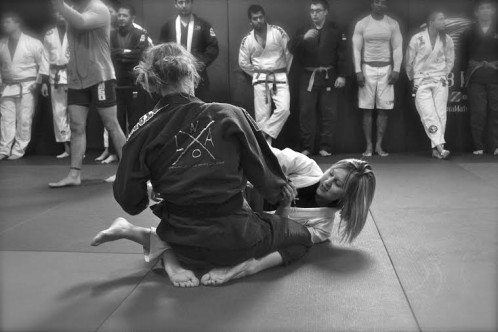 ” I’ll go to a competition or visit another school and meet new people and may not see them for years.  Then I’ll run into them at a tournament and we’ll greet each other with warm hugs and it’s just awesome.  There is this mutual unspoken understood friendship and respect for one another.  There is so much love and camaraderie in the sport.  I’ve met some of my closest friends on the mats while getting my butt kicked by them. I’d give most of my teammates a kidney if they needed it….too bad I only have on spare.”

She says her greatest accomplishment in Brazilian Jiu-Jitsu was getting her black belt. Even after three years of having it sometimes she still can’t believe it. Looking back she had some advice for the white belt Caroline and advice that any newbie can benefit from. She said ” I’d tell myself so many things.  Train harder.  Study the art as much as you can.  Don’t stay away from the gym too long. Appreciate what BJJ does for every aspect of your life.  It’s ok to lose because you only get better and stronger when defeated.  Bring more friends to the gym and share this awesomeness with them.”

She says that her teammates are a big motivation.  She says she was a purple belt forever and had been on a steady plateau for a while. She saw no end in sight.  One day she called Marco, a close friend and training partner (and pretty much her Mr. Miyagi), she was all emotional and told him she wanted to quit.  In so many words, he told her to suck it up and get back on the mats.  Through sniffles she reluctantly agreed because she knew deep down she couldn’t quit. 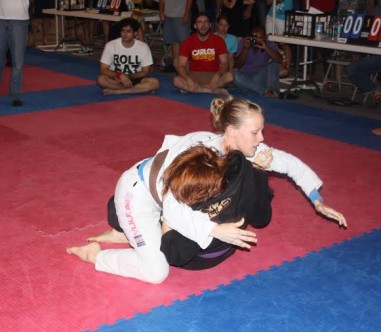 “That’s one of the things with BJJ, once it has its grips on you, they are real hard to break no matter how hard you try.  It’s one of the best friends you can have.  It’s always there for you, even if you leave it for a little while.  The mats will welcome you back, no questions asked.  My teammates are my family and NOLA BJJ is my second home.”

This will be Caroline’s first time hosting a Girls in Gis event. She has some great technique planned for us. Some of her favorite half-guard techniques. What she says is her strongest position. According to Caroline programs like Girls in Gis does a great job mainstreaming Brazilian Jiu-Jitsu and showing women what it is. She says that she thinks a lot of women feel it is too rough, or they’re too small, or they’re not strong enough, or they’ll get hurt.  She says that all women training Brazilian Jiu-Jitsu need to be ambassadors of the sport and show how BJJ is THE sport for women. She is very excited to be apart of the first Girls in Gis event in Louisiana and looks forward to the many more to come.

Join us and Caroline April 2nd. More information and registration at: www.girls-in-gis.com/blog/girls-in-gis-louisiana-special-event

One thought on “Meet the Host of GIG Louisiana Special Event: Caroline Vanek”