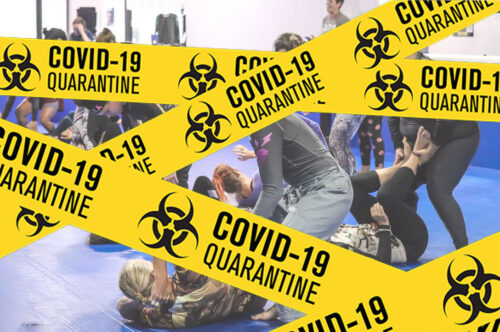 To say that lockdown hasn’t been easy would be a severe understatement.  Even as some communities have begun to reopen, one of the hardest parts continues to be the isolation, particularly from the practice and community of BJJ. For me, not having BJJ as an outlet and as an anchor, has left me feeling adrift and raw.

But if I couldn’t practice BJJ, the least I could do is connect with its community.  So I reached out to several other women to see how they’ve been dealing during this time. I didn’t know what to expect, but I certainly didn’t expect to be so moved by their responses.  Here’s what I learned.

Each of the women who I reached out to were in very different situations, but the same theme of grief and misery was dotted throughout each of their responses. “You can’t BJJ alone … and that’s what makes this period especially difficult,” was one line that made my heart surge with empathy – and surprisingly, relief as well.  I honestly thought I was the only one struggling, that everyone else had found the secret to keeping sane during this time. Turns out there is no secret, only uncertainty.

And that uncertainty extended to thoughts about when lockdown is lifted and gyms reopen. “Should I go? I want to, but is that responsible?” one woman questioned. The only thing we can be sure of is that there will be more questions and more hard decisions to make in the days and months to come.

Do what you can with what you have now

Just like how everyone has a different style of playing BJJ, each woman had a different response about how they’ve been filling the BJJ void. The range was wide, due in part to their different situations: Lauren, a grad student who trained four times a week prior to lockdown, had implemented a morning pilates routine similar to her health practice prior to training BJJ. Another woman, who described BJJ as “a lifeline for [her] physical and mental health,” has found a trusted group to train with. Kim, who has mats at home and a live-in BJJ partner, has kept herself active with some BJJ-inspired yoga and aerobic workouts, but noted sadly that BJJ “isn’t something a single person, or even two, can try to accomplish in a bubble.”

And while there was that shared tone of resignation, there was an equal amount of determination to make the most of what they had in order to stay strong – both mentally and physically.

You define the line

If there’s one thing I took away from the responses I received, it’s that even in the face of this chaotic, uncertain time, we still have some control over our bodies. In the absence of the BJJ training each woman created new goals for themselves, from generally “just keeping in shape” and learning “to rest a little more,” to specifics like “increasing core and hip strength.”

An important part of creating these goals came from each woman getting back in touch with herself, each one taking the time to listen and reconnect with her body.  One woman described how important it is to trust yourself, especially in this current moment where there are so many conflicting opinions and changing news articles. “Slow down,” she urged. “Take things on a day-by-day basis,” echoed another.

Ultimately, we’re all going through this same painful experience together. But if there’s anything we’ve all learned through BJJ, it’s that we’ll get through this, and we’ll come back even stronger than before.

Jess Burtubin is a light feather purple belt currently under lockdown in Brooklyn, NY.  The full responses mentioned in this article can be read here: Pandemic perspectives. More ideas on training during this chaotic time and other thoughts can be found on her blog, Rolling With the Big Boys.