Skip to content
Home » Blog » I Train Because I Love BJJ 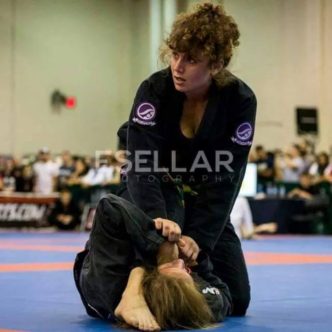 Every woman’s jiu-jitsu journey is unique. Case in point: Maia Matalon, a long-time grappler who cut her teeth years ago on her high school wrestling team. The Northern California native later starting training judo in college. She soon realized her favorite part of judo was “newaza,” also known as grappling. Naturally she transitioned to Brazilian Jiu Jitsu and the rest is history.

Liz Sussan, who is co-hosting the Girls in Gis D.C. Special Event on May 20 with Matalon, caught up with the 50/50 Jiu-Jitsu black belt. Maia chatted about her journey in jiu-jitsu, her first competition, and the funniest things she’s witnessed on the mats.

Why do you train?

It sounds simplistic, but I train because I love BJJ. It’s the most fun, challenging, and rewarding discipline I’ve found, and that makes it the most exciting to me. When I started training I was all about competing, I absolutely love the entire experience of competition, from preparation, to the huge surge of adrenaline I get when I step out on the competition mat.

How often do you train?

I’m still recovering from my last knee surgery, so right now it’s just three days a week for me. I still teach five days a week, and I’ll watch class on the evenings [when] I’m not training. Injuries are no fun, but there’s so much to learn by watching!

Tell me about your first competition. What was it like?

The funny thing is that I don’t remember my first BJJ tournament, but I do remember my first wrestling match. I was 13 and it was against a boy who totally crushed me. Midway through the match I thought, “I’m terrible at this, but I’ve lasted longer than I thought I could!” I think it was a whopping two minutes before I got pinned.

How has your BJJ training evolved over time?

I feel like it’s a constant evolution! When I was competing a lot I would watch match tape and want yell at myself, “What are you doing?!” And that would be maybe two whole months after the competition.

My coaches have also helped me so much, when it comes to evolving my BJJ. Ryan [Hall] is such an innovator in the sport, he has his own approach and that has really influenced my understanding of martial arts. Jen [Hall] is the first person who really got me to think about how your unique attributes affect your BJJ, in her case she’s way smaller than her training partners, so she has to adjust her BJJ to take that into account. I don’t have that challenge at all, I have plenty of training partners who are my size, but it got me to start thinking about my BJJ in a new way. For example I’m naturally hyper flexible, which can be a huge advantage, but it can also be problematic if I allow myself to get stretched so far that I’m out of position.

Lastly, teaching has really affected my BJJ. I’m the head coach for the kids program at 50/50, so I’m constantly teaching basics and trying to think about how explain technique in the simplest way possible, which has, of course, given me a much stronger understanding of fundamentals.

What’s the funniest thing you’ve ever had happen while training BJJ?

It’s a cop out, but honestly quoting things that happen in my kids class is way funnier than anything that ever happened to me.

[This one time] I’m demoing side control to my three- to five-year-olds. “Does anybody remember what this position is called?” A very proud, confident 5-year-old raises her hand [and says], “Side Patrol!”

I once had a 7-year-old boy legitimately try to force push with his brain. I made the mistake of asking the class if anyone could move things around with their brains (the lesson being that they needed to move their bodies) and when I looked over he had his fingers at his temples and he was turning red with effort. My bad.