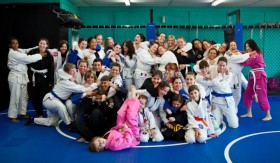 It may have been freezing outside, but the action at GIG-Weatherford was sizzling hot! Only the second event of the year and we’ve almost had eighty participants combine! We’re just getting started! Forty women and girls from all across Texas and even a four came all the way from Oklahoma to spend February 10, 2013 at GIG-Weatherford.

The event was hosted by Purple belt Pilar Roper-Foo at Epic BJJ Academy. Pilar led the group of girls through a variation of warm up drills and exercises. She then moved on to a few  instructional moves including the lasso choke and ankle attacks. Pilar’s was the hostess with the mostess and a true ninja on the mats. Her natural leadership abilities combine with her  patience as an instructor/teacher shined through. 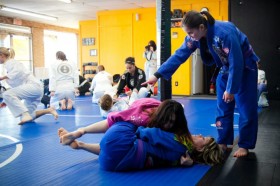 ranged in skill level from their first day to a handful of purple belts. The higher belts helped the lower belts.  That’s what GIG is all about-team work, community and growing the sport for females everywhere. The Dallas girls always know how to do it right. The tight knit community in the Dallas area is strong and it shows. The Oklahoma girls were in the house! It’s always a treat when our neighbors to the north come to visit. It’s like seeing family. Not to mention, those girls know how to have fun! Everyone pitched in and joined in the fun to make this event one to remember.

Thank you Dondi, Pilar and Epic BJJ Academy for hosting GIG-Weatherford and for making this a memorable event! Big thanks to Kristine Felts for MC’n, Yuri Star, Marissa Star and Tara Arrington for taking photos. Most importantly thank you to all the GIG-Weatherford participants for spending their Sunday at GIG! Strength in 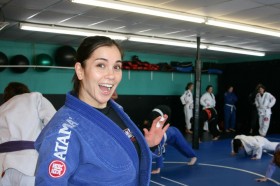