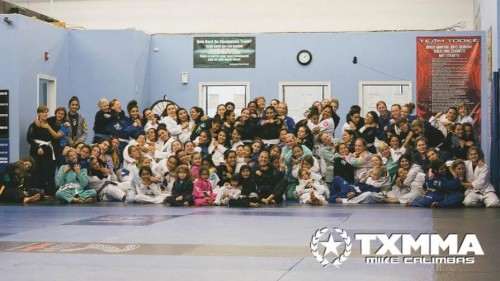 Team Tooke in Houston kicked off the summer by hosting Girls in Gis largest monthly chapter event in Texas with 90 participants.   Blue belt Maribel Ramirez led the event through warm ups and technique.  The women in attendance had a great time, and Kay Tarson found the event to be “massively impressive.  The vibe was unlike anything else I’ve attended.”

The girls started with some light jogging, shrimping, switches and forward/backwards rolling.  They then went into shooting drills, s mount switches, and drills from the turtle top position to practice putting pressure on top of their partners.  The last drill was a great entry into the technique of the day. 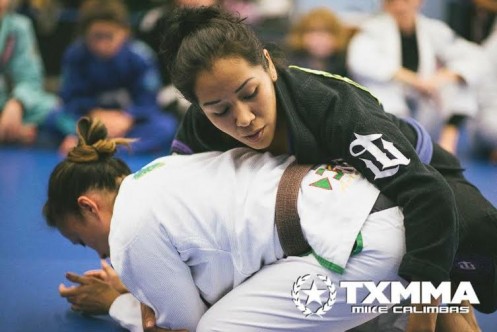 Maribel showed how to defend a double leg shoot by putting pressure on person’s head so they go into turtle.  Once turtled up, switch to the side of the person and achieve side control by controlling the far side elbow and ankle.  Maribel showed three variations from that position.  One was an Americana.  If that didn’t work there is a straight armbar or kimura available.  Another option is flipping the person from turtle to side control by controlling the hips and going north-south to a bread cutter choke.

The girls followed up technique with some positional sparring from turtle.  Then the girls took turn trying to pass each other’s guards.  The person in guard could sweep or submit.  After that, the girls had open mat and were able to roll with each other. 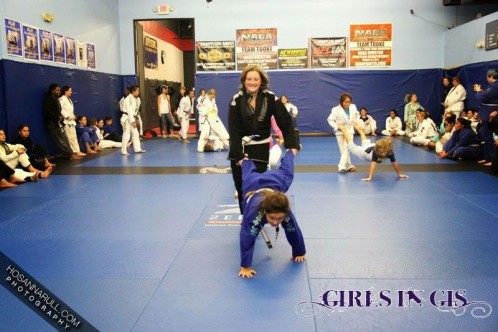 Last but not least, the girls were able to participate in a physical challenge.  The kids did a wheelbarrow race and Skyler Hoch, and her partner Carmen came out victorious.  The adults were challenged to hold a leg lift and Yasmine Cooper proved her core strength by holding it for ten minutes.  Congratulations go out to Kristine Heines for the random drawing of a rash guard. 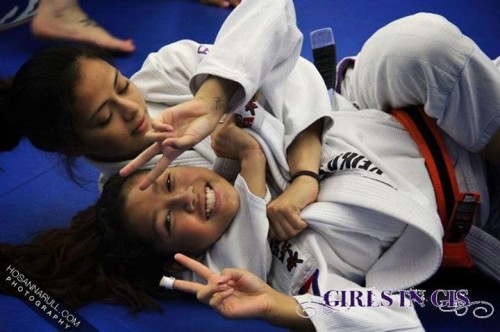 This being the biggest monthly chapter event, GIG had several mother daughter sets including Skyler and Carla Hoch, Cassie and Abbie Herrera, Yancey and Charlotte Head and an impressive grandmother, mother, daughter set of Belinda, Vicki, and Aliza Serrano.  While there is nothing like training within your school, it is a great learning experience to roll with girls from other gyms.  The community of Girls in Gis is an ever growing and empowering one, and we hope to break the record for biggest event that was just set.  Big thanks to Team Tooke Houston, Maribel and everyone that made this event possible. Thank you to our sponsor Phalanx for the rash guard giveaways. Also big thanks to our photographers Mike Calimbas of TXMMA and
Hosanna Rull: Combat Sports Media for covering the event. Check out more images and give their pages a like.