This February wasn’t just a special year because of leap year it was also a record breaking one. On February 28th 2016 Girls in Gis hosted it’s first event of 2016 in Oklahoma at Triton Fight Center in Broken Arrow. This was a not only the first event of the year, but a new record was set for the largest women’s Brazilian Jiu-Jitsu event ever hosted. One hundred and sixty-five females came together to be a part of this monumental experience from all across Oklahoma, Kansas, Texas and Missouri. Host black belt Gina Franssen, purple belt Jessaca Linnabery and purple belt Janie Meadows led the women through an event to remember. 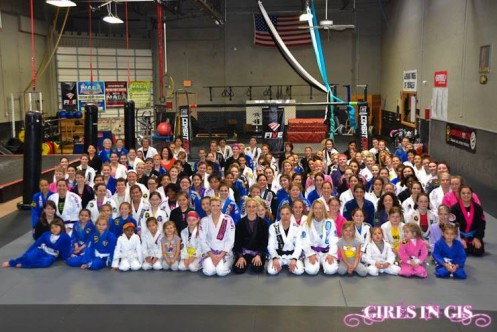 The event began with a welcoming reception led by our Girls in Gis Midwest chapter captain Jennifer Gray. Among the participants many had attended Girls in Gis events before and quiet a bit had chosen to take their first step today and begin their Brazilian Jiu-Jitsu journey. The introduction was short and sweet and led into a warm up led by a team of purple belts. The team did am amazing job facilitating a warm up and helping all one hundred and sixty-five girls. Among the favorites of the kiddos was the cartwheel warm up. Once everyone was warmed up it was time to learn.

The purpose of Girls in Gis is to unite as a community and work together to support each other. It is a place to come together and opening learn from each other to better Jiu-Jitsu as a whole. This event was a prime example of these principles at work. Our three hosts worked together cohesively to share their insight with the group. First up on the agenda for guest instructors was purple belt Jessaca Champion-Linnabery taught a great arm bar from the guard. Next up was Janie Meadows showed a triangle. Last but not least was Gina Franssen who showed two sweeps. The hook sweep and sickle sweep. All of which were crowd pleasers and gave some serious homework for the group to return to their academies and drill. 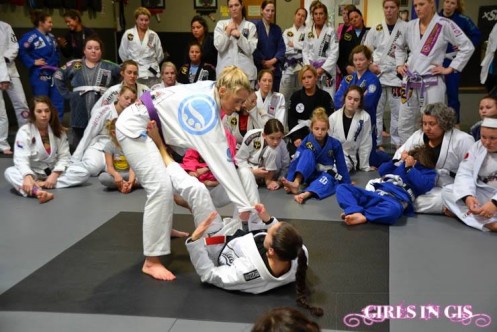 Thanks to our sponsors and Triton Fight Center we had some awesome giveaways. Triton generously donated four Century Martial Arts gi to be raffled off and used for challenges. Among the gi giveaways were three adult sizes and one teens. Bring it BJJ also joined in the fun and contributed by donating shirts, a tote bag, a calendar and lots of tape.  As if that wasn’t enough Cummins Southern Plains also donated Jason’s Deli refreshments to the event for everyone. Big thanks to everyone of our sponsors for their generosity and contribution to making this a very special event.

No event is complete without some rolling and rolling is what we did. Seeing one hundred and sixty-five women and girls on the mats rolling is a sight to see. The energy on the mats was powerful. After a great work out and lots of learning Shelby Williams led the group through a yoga cool down. 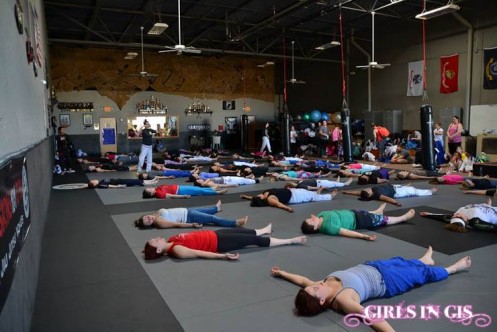 As a surprise Triton giving plaques to all of the host and Girls in Gis chapter captain Jennifer Gray. Thank you to everyone at Triton, Piet, Jessica, Gina, Janie, Jennifer and everyone for helping to making this event possible. Thank you to Ali Steele for signing during this event for our deaf friends. This event was possible due to team work and it was very sweet to have that recognized. The spirit of the community has been lifted and Girls in Gis is proud  to have contributed to this. Girls in Gis is a sisterhood and family. Three generations of women shared the mats at this event.  Standing in a room with all that love gave one girl goosebumps. Women inspiring women, teaching each other and uplifting one another. Now that is what this is all about. 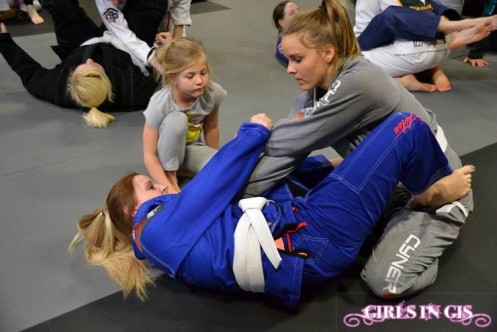 Records are made to be broken, and indeed they will. We broke our previous record of 150 participants. If you were to gamble on whether the new record of 165 will be beat, than I’d say its a sure thing. But it’s never about how many, but how much these events change the course of the future. With each coming together is an opportunity to do more and reach further. To support each other on our journeys, helps each other take that first step and inspires us to keep on. We are a community and a family. By coming together we are stronger than we are alone. Strength in Solidarity.