Along the shores of Waikiki under the Diamond head crater at Kapiolani park is where you found Girls in Gis Hawaii on May 21st 2016. The cool trade winds blew, the sky was blue with big fluffy clouds and under the monkey pod trees is where 2000 sq ft of mat lay with ninety women and girls Brazilian Jiu-Jitsu (BJJ) practitioners. It was an event that girls dream of. An event like no other event. A historical event that those who attended will never forget. Legendary multiple time world champion black belt Penny Thomas led the group through some of her favorite moves which included self defense and sport BJJ technique. It was a perfect day for BJJ. 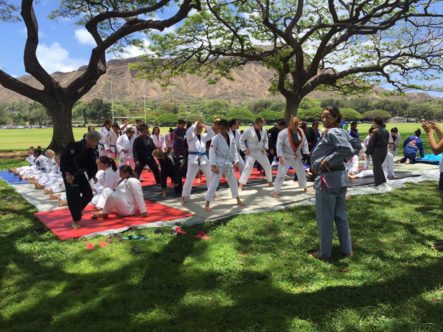 Girls in Gis ambassadors Shama Ko and Lana Hunter facilitated this event. Shama opened the event with a welcoming reception introducing Girls in Gis and the guest instructor for the day.  Having been the biggest female event in Hawaii, this was a unique experience for everyone in the room. The event began with an icebreaker warm up which had everyone in hysterics. 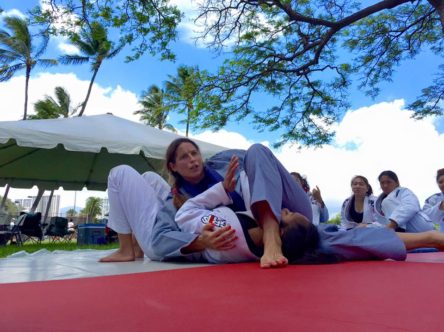 Ninety girls from all of the Hawaiian Islands were joined in sharing this experience. Over 20 of the ninety girls were under the age of 10 years old. Brown belt Daynin Dashefsky assisted Penny as she led the group through a series of techniques that included self defense, Judo and sport Jiu-Jitsu. Daynin was a huge help and wonderful at leading the little Girls in Gis. Everyone left with a little taste of Penny’s style and World Champion moves.

We had tons of giveaways thanks to Choke Aloha, Neocell, Phalanx, Adidas, Cryo Therapy Hawaii and Figure Four . We had an awesome belt tie off challenge and kids race. Congratulations to all our winners!

Girls in Gis Hawaii would not have been possible if not for the entire community coming together to support this event. Everything from helping to coordinate, logistics, donating mats, borrowing trucks, helping to move mats, donating giveaways, hosting, assisting and photography. Thank you to Grappling Unlimited, Freestyle BJJ, Aloha Academy Jiu-Jitsu, and Central Oahu We can’t thank everyone enough for their contribution to making this event possible. There is a reason Hawaii is called the Aloha state. There is so much love and ohana in the Hawaii BJJ community. 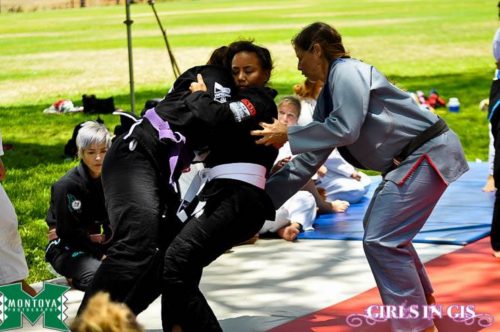 Unless you’ve lived in Hawaii or you’ve visited you will never understand how widely accepted BJJ is in the Hawaiian Islands. BJJ is perhaps one of the largest sports on the islands. Everyone knows what BJJ is, even if they don’t train. Hawaii maybe considered the most isolated nation in the world, but as for Jiu-Jitsu goes, it is in the center of it all. We were honored to contribute to this large and tight knit community and look forward to many more events in the Aloha state.