Home » Blog » Get Comfortable Being Uncomfortable 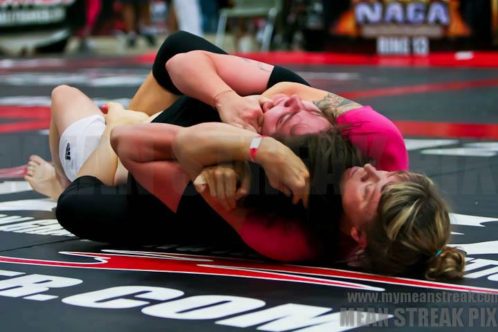 Like most practitioners, when I first tried Brazilian Jiu Jitsu I was instantly hooked. Although unlike many, I wanted to begin live rolling right away, as in my first ever class, right away. I saw it as an integral part of the training process and was eager to delve right into the good stuff.

Of course, as in the case of many white belts and new Jiu Jitsu practitioners, this did not go well. But I did quickly learn one of my most valuable lessons. It wasn’t how to tie my belt nor proper mat etiquette, one of the very first lessons I learned was to get comfortable being uncomfortable.

In my first classes I would be in awe over the specificity of the technique and the beauty of the details of every move, but the thought of rolling scared me a little, and excited me a lot. I loved the idea of being able to live spar and learn how to maneuver my body seamlessly like the upper belts did, but I found myself always getting stuck.

Despite having been introduced to basic mount escapes, my first instinct when someone was on top of me was to tap. I understood that tapping would end the sparring, and with a large man on top of me I was always quick to do this. Understandably this often resulted in the same confused reaction. My opponents would ask why I tapped instead of working to get out of the position. I thought, well, I just wanted them off me, and I just wanted to be able to breathe. Finally, an upper belt told me what I needed to hear, I had to get used to it. Instead of panicking and tapping without a submission, I had to stop and think about what to do next.

It was at this point I began to familiarize myself with my own fight or flight instincts and learned that you can’t always take the easy way out. There’s no “tapping” in life. I learned I needed to stop, think, take a breath and decide my next move and move forward. This was quite possibly the most valuable lesson I initially learned in Jiu Jitsu. I told myself if I can breathe, then I can stop and think, and if I can think I can decide my next move instead of panicking. I learned to get extremely comfortable in these uncomfortable positions. I even found myself putting myself in these positions to practice my hand at dealing with adversity.

If I could learn to relax with a 200lb man on top of me and calmly plan my escape, then my daily trials and tribulations seemed less threatening. This very-real physical threat taught me how to control that fight or flight instinct. It’s something that I have taken into my daily life and learned to stop and access situations whatever they may be. Especially as a young woman, learning to not panic in the face of danger but rather employ my skill set and take a second to think seemed like a valuable lesson.

As someone who used to choose to “tap” right away in several situations, on and off the mats, I’ve come a long way and I have most certainly learned to be comfortable being uncomfortable.

2 thoughts on “Get Comfortable Being Uncomfortable”