Skip to content
Home » Blog » Catching Up With the Helmy Sisters

Just about a year ago, we met up with Yara and Nancy Helmy.  This dynamic sister duo captured the spirit of our sport and the attention of the Jiu Jitsu community.   They are sisters of Muslim faith who faced some challenges in 2014.  We wrote about their struggle to compete in the IBJJF.  The IBJJF has a ban on headgear in competition but the girls’ religious traditions would require them to wear a head covering.  They were not willing to let their competitive playground be curtailed without a fight.  This kind of perseverance is the fabric in which the Jiu Jitsu community was built upon.

“The ban was lifted in February of last year. I had emailed someone from GracieMag our interview with you and he thought it was interesting. He emailed me back and said he would talk to someone.  A couple days later I got an email saying, “congratulations, you can now compete.” I was excited but I still didn’t believe it.”

“I remember that day. I was lifting with our conditioning coach when Yara texted me a screenshot of the email. I read it out loud. My coach and I were speechless. I called Yara and we couldn’t even finish a sentence from excitement.  Before we signed up for the NY open we emailed him again to make sure the rule was finalized and he said yes. Apparently, GracieMag wrote two articles about us and we didn’t even know it.  Both were in Portuguese! Haha” 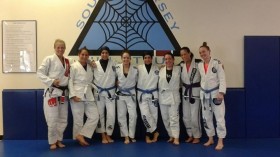 The girls learned a lot from their first jaunt into the IBJJF competition arena at the New York Open.

The sisters are still actively training.  In fact, they train every day, multiple times a day and have turned it into a family affair.  Their father started training Jiu Jitsu and their mother took up conditioning classes at their gym.  The girls do note that they push each other more than any outsider could.

“We train with each other a lot and it really helps because we don’t sugar coat anything. If one of us does something wrong we straight up say it. Sometimes we train so much with each other that nothing works anymore.  However, we are blessed to be part of a huge association. We have many female teammates in the Ricardo Almeida Association who we travel and train with frequently. We also convinced our father to start training and now he’s an addict. He’s big and strong. Rolling with him has changed our training for sure.”

We touched on how the sisters’ Jiu Jitsu accomplishments were received by women in their religion and women in general.

“Everyone thinks it’s awesome and they all wish the best for us. Actually, after the first article was published, when we would go to competitions we would get stopped and asked, “are you the girls from that article?” Some people who are 100% American stop us and thank us for doing what we are doing and wish us good luck.  They say we are an inspiration. I’ve had many people message me on Facebook saying what we are doing is awesome and to continue doing it. Some females ask where we get our head covers.”

“A number of Muslim women have contacted me since the ban lift from Canada to Singapore and everywhere in between. They are proud to see Muslim women making a statement and breaking stereotypes. When i’m not in the gi, people have asked me “do you feel oppressed?” I have to laugh. That is the image society has of Muslim women. If anyone has met my sister and I before, they will tell you we are far from oppressed. Our religion is empowering us rather than enslaving us. Islam has taught us that women are strong pillars in society with the strength to accomplish great things. But society has twisted the religion and made women inferior. Through BJJ, we have shown that Muslim women are capable of training at the same intensity as men without compromising their faith. I think overall the population of women in the BJJ community is growing which is amazing. More training partners for us and bigger divisions in competitions!!” 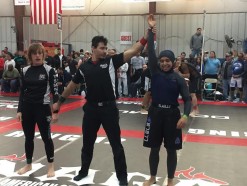 When pressed about whether or not they would consider themselves pioneers based on their accomplishments in their still early journey, the girls are quick to say that they still have a lot to accomplish and are girls like the rest of us who just want to roll!!!

“I wouldn’t call us pioneers. We are just two girls who wanna roll. Professor Jen Allen Russell is our role model in BJJ. She was one out of two females when she first started. She had to work twice as hard as male counterparts so she would not be “that girl” in class. We adapted the same mentality from her early on. If we’re doing push ups/sprints/drills or whatever exercise it may be, we refuse to be the first to stop or quit. When we were told we couldn’t compete because of our hijab, we didn’t accept that and kept on fighting. It would be a lie if we said we did it all by ourselves. We have supportive instructors and family. It was hard getting denied multiple times. Without their encouragement and support we couldn’t be “those girls from the article”. This was a win for the whole team, not just the Helmy sisters.   Being called a pioneer is a great responsibility. We are still in the beginning of our BJJ career and we haven’t accomplished much. We are happy to see women looking at us and saying, ” if you can do it, then I can” (especially during the hot months when we’re still covered and training in a room full of sweaty people). That is inspiring to us.” 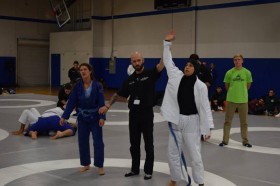 When asked about advice for brand new white belts, the sisters had this to say:

“You can’t give up. Sometimes in Jiu Jitsu you’re the hammer and sometimes you’re the nail. As a new white belt you will mainly be the nail getting hammered REAL deep into that piece of wood. You’ll want to quit.  You’ll want to give up. You’ll have days where you think you aren’t getting any better. Everyone goes through this.  The trick is to keep training even harder and never quit. Be the first one on the mat and the last one to leave. You’ll run into many plateaus throughout the entire journey and you’ll have to learn to like the plateaus. Everyone goes through them, but before you know it your wall will be filled with medals and they will clink every time you shut the door.

2 thoughts on “Catching Up With the Helmy Sisters”