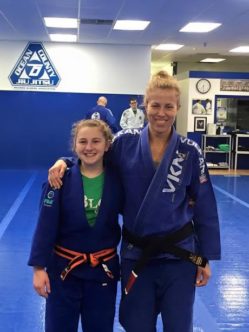 There are people in this world that are born to lead and those that are meant to follow. Not everyone is meant to lead and we need followers as much as we need strong leaders. After all a chief is only as strong as their tribe. There is something deep down inside a natural born leader that makes others want to follow. They are confident, bold, brave, compassionate and understanding. Jen Allen Russell is one of those women that was born to lead.

Jen says she is an “all in or nothing” type of person. There is no point in doing something unless it is done right. She says at times she struggles to find balance in life, but she always makes time for what is important. Both her and her husband train. However they don’t train together much, but they do bounce ideas off each other in regards to technique and skills. 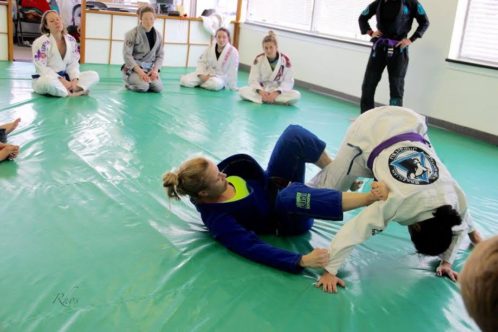 Jen’s Martial Art journey began in Muay Thai and after five years Jen says that she started to get bored. She says she saw a women’s MMA match which then ignited her interest in perusing the grappling arts. In 2004 Jen began her training under Professor Ricardo Almeida’s and then in 2008 Jen joined Ocean County Brazilian Jiu Jitsu under Tom DeBlass.  It was at Ocean County BJJ that she founded a women’s only program teaching both women and teens.

“I absolutely love to teach. The most rewarding part for me isn’t the competitors. It’s the shy, unsure young lady that finds confidence through Jiu-Jitsu. It’s the new student that gets excited when they understand a new technique. It’s helping to build people up.”

In 2013 Jen was awarded her black belt along side teammate Garry Tonon. Together they are the first two black belts under Tom DeBlass. She says that she is currently the only female black belt on the team, but that they have two brown belt ladies that are not long behind her. She looks forward to sharing that honor with them someday. 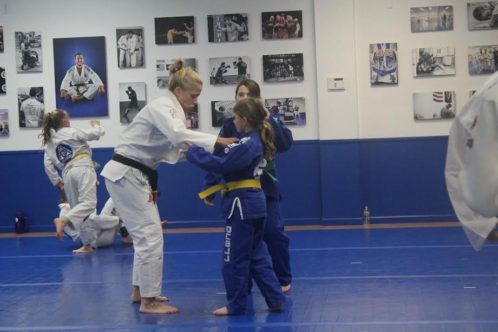 For so many of us our BJJ journey is filled with many ups and downs. Jen is no stranger to the challenges we all face. She says through it all the biggest challenge she has had to overcome was believing in herself and trusting her Jiu-Jitsu. This is something that most of us struggle with. On the flip side Jen says that her greatest accomplishments as a competitor has been winning the Masters Worlds her first year as a black belt. However Jen says the greatest accomplishment of them all has been starting a successful women’s program.

According to Jen she says a women’s program needs to be geared towards women. Meaning teaching specific techniques that would work best on larger and much stronger people. She also adds that it really helps to have a female instructor leading the classes. Someone the students can relate to when it comes to the ups and downs they will encounter. Jen attributes the mainstream popularity of Jiu-Jitsu among females to the growth of women’s MMA.

“I think it really helps if it’s taught by a female instructor. Someone who’s gone through the ranks and has encountered the difficulties that they may face. For myself, I keep an open format. The ladies are welcome to ask me to go over anything. I don’t stick to a firm curriculum. When you’re starting a program it takes a while to build up the class. You will get weeks where it’s only a few students but it’s important to press forward and have it on your schedule.”