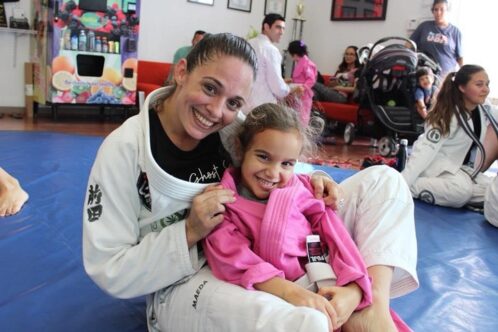 If you’re in the Miami-Dade area of Florida, you just may have already heard of Olivia Shand. Residing in South Florida, Olivia Shand is a mathematics professor, judo orange belt,  BJJ black belt, competitor, IBJJF and NAGA referee, fitness enthusiast, and head of Jiu Jitsu Gypsies (a women’s BJJ group).

And if you can wrap your head around a few more things, she is a self-proclaimed introvert, bookworm, friend, and advocate for those who can’t speak up for themselves.

What initially got you involved in BJJ?

I have been training for about eight years total. I stumbled upon BJJ through an old boyfriend. He wasn’t too into me training, but he didn’t last very long anyways. I got rid of him and signed up to train.

I love the technical and mental aspects of the sport. My brain is super analytical (hence all the math degrees), so I appreciate the interconnectedness of the techniques, the strategies applicable in competition and self-defense, and the mental control required to be a strong competitor with a consistent record.

What’s one of your biggest milestones on your BJJ journey?

The biggest milestone thus far is being awarded my black belt.  Achieving this rank was the overarching goal.

That year was amazing for me with respect to competition results. Particularly special to me was winning in Rio de Janeiro, which is my coach’s hometown. That tournament is held at the Tijuca Tenis Club which is where the original World’s was held, so there is a lot of history in that place.

How did Jiu Jitsu Gypsies get started?

The idea came from Teresia Carreon. We were training partners back then.  She wanted to get girls together to have a variety of female training partners and supersede jiu jitsu politics that prevented ladies from training together.  She organized the first year of events, which were also run with Heather Raftery who is a current Andre Galvao black belt. The group was named after Heather who calls herself jiu jitsu gypsy.

Shortly after the group started, Heather moved to California to train under Galvao, and I began helping Teresia run events. I took over the group after Teresia moved away.

The Gypsies group has grown so much over the years. We have more and more new girls coming to events, and we have been able to leverage the growth to give back to the community in more ways.

You have a lot of competition awards, what’s next on your list to accomplish?

My next accomplishment is to not get smashed. I also had a second shoulder surgery in June, so I am working on recovering from that and returning to competition. I need some black belt level golds to add to my collection.

Any advice for women in training?

For sure! Women who train need to just keep training. The most important thing is persistence. Find a good school with a good coach and good training partners who respect you and support you. Train and just let the time and belts go by.

A common misconception for lower ranks is that it is disrespectful to turn down a roll with a higher rank or to stop a roll that has already started. This is not true, and if this is the mentality in your gym, you should reevaluate that environment. To me, agreeing to roll is giving consent. It can be revoked at any time. It’s your body, and no one else should have control over your body. I’m pretty small and very injury prone, so rolling with men who have inflated egos or too much strength without sufficient control is dangerous. It’s sent me to urgent care and the surgery suite plenty of times.