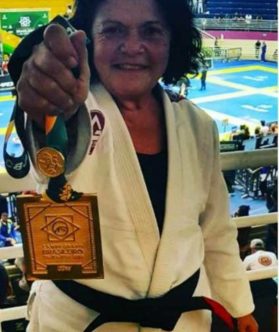 More and more women are entering Brazilian Jiu Jitsu than ever before, and many are proving that age really is just a number. Most recently Nair Mota de Oliveira of Aracaju-Sergipe, Brazil went viral when she became the Brazilian Nationals Master 7 Champion and earned her black belt from the Gracie Barra Team at the age of 67!  Not only did she prove that more mature women can train Jiu Jitsu, but that they can indeed follow their dreams all the way to the top.

Nair is a glass half full kind of gal. While most in their mid-50’s might be focusing on planning their golden years sitting back and relaxing, Nair instead decided it was time to try a combative sport like Brazilian Jiu Jitsu at the age of 55. If you haven’t guessed by now this wife, mother of two and grandmother isn’t like most other women you’ll meet.

She said she was inspired to start training when her son started training and started to see good results. His Professor at the time Luciano Vieria suggested she start training just for fun. But for Nair she ended up being more dedicated to Brazilian Jiu Jitsu than just that. Fast forward 12 years later and she is now a black belt.

Her background as in Physical Education combine with her passion for Brazilian Jiu Jitsu has given her the motivation to keep going. She says that even with all the hardships she has gone through in her Jiu Jitsu journey she never thought about quitting training.

“Physical activity, especially Jiu Jitsu, makes me feel good physically and mentally. Being around athletes makes you look for a better lifestyle.” 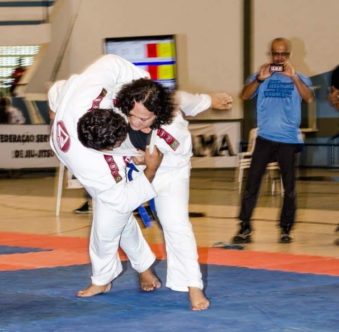 While training Jiu Jitsu at 67 seems like a huge accomplishment, what about competing? Nair’s son who also is her Master and who she says she idolizes most in Brazilian Jiu Jitsu is who motivated her to compete.

Going into her first tournament she says she didn’t have any fears or insecurities. She felt confident in the work that she had done with her coach and teammates. And it showed. She walked away the Brazilian National Master 7 champion.

Physical fitness is something that Nair has dedicated her life to and is very passionate about. She says that no matter what sport you are in, everyone should practice physical activities and keep a healthy lifestyle…at any age. She also adds that you are never too old to try something new. Even Brazilian Jiu Jitsu.

“What is to be too old? I don’t feel old. People need to stop limiting themselves and start to look for activities that give you pleasure and quality of life. And why not Jiu Jitsu? It’s an activity that gives you a wellness and perfect physical condition.”

Moving forward Nair says that she wants to continue to train and participate in tournaments at the black belt level. However, she says the biggest difficulty that women her age face is not all tournament have Master 7 division and that sponsors don’t invest in the athletes, especially in her age group which makes it hard to compete as much as she would like. But as you’ve probably guessed by now that won’t keep Nair down!

One thought on “Ages Is Just A Number”