Skip to content
Home » Blog » Advocating For The Underdog 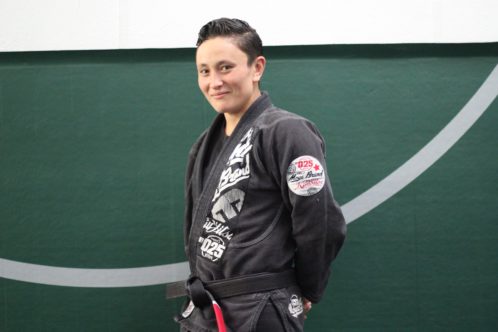 Although we like to say that Jiu Jitsu is for everyone, is it really? Are we all really considered equals? And is Jiu Jitsu truly a place free of judgement or prejudice?

Perhaps there isn’t one blanket answer for the entire Jiu Jitsu community. However, by just looking at the percentage of women verse men in Jiu Jitsu, the marginal number of openly LGBTQ+ and minority practitioners in the community the facts do suggest that there are some areas we can improve. Among the many advocates that hope to support and empower women, members of the LGBTQ+ populations and minorities through Jiu Jitsu is Shawn Tamaribuchi-Keiser. She says that she wants to provide Jiu Jitsu to those who need it most. Through sharing her passions; teaching Jiu Jitsu and community building she hopes to empower others.

Shawn has done competitive sports her entire life, but it wasn’t until she graduated from college that she was able to explore martial arts. She says that she initially started off training Krav Maga for a few years for the more practical purpose of self-defense, but after a series of injuries she decided she wanted to train something that had more emphasis on control versus pure aggression. She then moved onto Muai Thai for about five years and periodically trained no gi. However it wasn’t until she put on a gi  at an all women’s training class, led by world champ  Lana Stefanac, that she really became interested in BJJ.

We caught up with Shawn to learn more about what makes this incredible advocate for women and for the LGBTQ+ community tick and what projects she is working on. 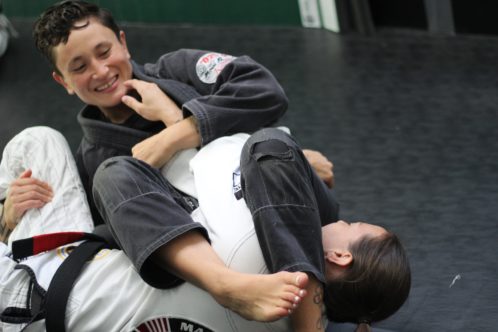 What is your biggest goal in BJJ?

My current big goal is to help launch more community programs that provide classes for at risk communities, specifically women and the LGBTQ+ populations. We have been running a few out of my gym in Oakland, CA, FOUR Elements Fitness but right now we are looking for financial support, grants and funding since we are launching a nonprofit channel this year via our fiscal sponsorship via 501C3 Rock Paper Scissors Collective. Ideally, I would like to offer more scholarships and free program to folks that cannot afford it since these are often the populations that benefit the most from it.

Have you encountered any negativity in your BJJ community that is centered around your sexuality or preference?  Can you tell me of the support that you have received from the BJJ community?

I would say regarding my sexual identity, I have not experienced any direct discrimination in the BJJ community, but I do live and training in the Bay Area. I can say when I was more involved in the MMA community it was super homophobic, and I was denied a fight because they were “worried that my blood could be infectious”. I would say I have seen more negativity directly as a consequence of being a woman. The fight community can be incredibly sexist, and yes there is homophobia (more so directed at gay men) as well as rampant trans-phobia. I think I got desensitized for a while but then started to see the lack of women training or feeling uncomfortable. After being around for a while and speaking to a lot of other women, it’s downright horrifying what some have gone through from covertly sexually inappropriate behavior to downright assault. We still have so much work to do as a community to raise the bar on what is appropriate and safe behavior in our gyms and communities.

What are some of the ways that you advocate for the LGBTQ community?  Where have you seen the greatest need?

I have been running an LGBTQ+ BJJ class every Friday for over a year. Most of the students that attend are on partial or full scholarships. We have anywhere from 10-15 students on the mat each week for this class. I think the number one need to creating a BJJ gym culture that is more self-critical in a constructive way to make BJJ classes safe and inviting to everyone who wants to train. Right now, with the extreme levels of trans-phobia, homophobia and misogyny in society at large, it is no wonder why a lot of people do not feel safe walking into a gym. We need to go the extra mile to have programs and safes that people want to come train and trust their instructors and training partners. 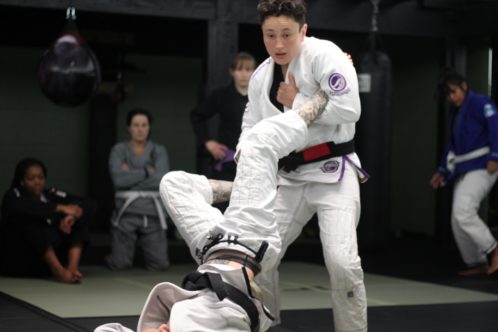 What caused you to embark upon the Female Fighter Project?  I took a gander at your website and would like to understand more about the format.  What is the goal with the content website?  What struggles, and triumphs did you experience for 2017?

I initially started the Female Fighter Project in 2010 when I was traveling internationally and just taking film (old school black and white) portraits of my training partners and friends I met along the way. I have an art degree in traditional photography and I felt like it was important to create these tributes to some of the amazing women I had met along the way, some legends, who were making positive impacts in people’s lives but rarely received any type of mainstream recognition. Especially in the fight culture, female athletes are more often overlooked and underpaid. It is exciting to see women’s MMA rise in popularity over the last 10 years but BJJ has a lot of catching up to do.

The reason I use traditional film-based photography versus digital is because it is a slower, more intentional and to some degree more costly processes. I only have 12-8 shots per roll of film on my medium format cameras, everything is manual from focus to exposer to film loading. It takes time and focus and technique, in a lot of ways it reminds me a lot of how BJJ works. Progress isn’t instant, you have to put in years, make mistakes, get frustrated, reflect on your process, this is why I love BJJ and why I shoot film photography.

About 3 years ago I had a solo show, I eventually would love to have another one on the 10 year anniversary of the project, but that’s a ways off and a lot of money. Right now I just want to be able to continue to shoot and process the film which also needs support and why I now have a Patreon, < *pitch* > “please considering joining” www.patreon.com/femalefighterproject  < / *pitch* >. I was working at a photography facility and gallery in 2011 for a few years which allowed me to do the project but that has since shutdown so I put my project on hiatus since I couldn’t afford to keep it going, but after a few friends kept bugging me to restart and said they would be down to be Patrons, 2017 I launched my Patreon and here we are shooting again! My Patreon now is the new home to all my new content and I hope to continue with it with the support of all the fans going into the new year. 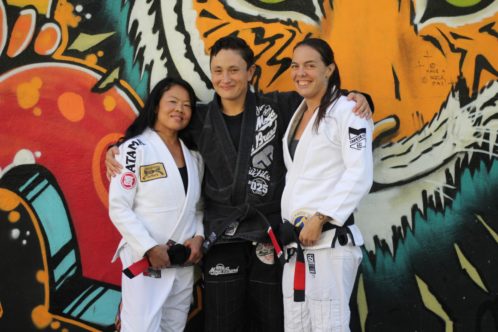 What is your biggest challenge in women’s BJJ?

The top challenges would be one limited points of entry… as I mentioned before, if gyms cannot create inviting learning environments, you won’t be able to continue to grow the sport. It’s time to reassess what the culture of the gym space is and takes steps to clean up some of the garbage that has been festering since its inception. I won’t dive too deep into the wasp nest of politics and financial misgivings I believe to be strangling the sport from the top down, but there’s that too.

What change would you most like to see in the BJJ community?

I think the best things we could do for the BJJ community is continue to find ways to open the doors to people, particularly those who have been historically excluded. The women’s and masters’ movements are gaining strength which is wonderful and I would love to see that momentum expand toward other groups under represented in the sport. This is one of the primary things that keeps me motivated to push past a lot of the personal obstacles and heartbreaks that the journey can bring. It’s why I teach a weekly class primary gears toward the LGBTQ+ community and offer scholarships to low income queer and transgender people of color. It’s why I was excited to be part of the Girls in Gis event and hope to be able to continue to support others who are doing the same.