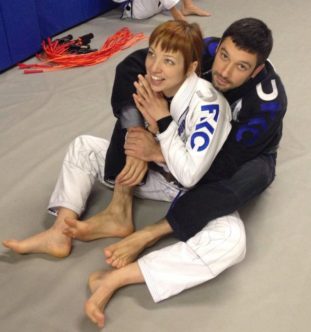 As the saying goes: we sometimes find exactly what we’re looking for when we least expect it. Liz Sussan can relate to that. Sussan had no idea how much her life would change when she met her boyfriend. Not only did she meet her soulmate, but the whole trajectory of her life would be forever altered.

Fast forward ten years later and Sussan is now a black belt in Brazilian jiu-jitsu, a full-time instructor, and an academy manager at Richmond BJJ Academy, an affiliate of the BJJ Revolution Team.

Sussan and Maia Matalon are co-hosting the Girls in Gis D.C. Special event on May 20. Sussan chatted with Matalon about her training in jiu-jitsu and some of the wackiest things she’s seen on the mats.

How did you get started in BJJ?

Well, I met this cute boy who owned a BJJ and Muay Thai gym, and as our relationship got more serious, I learned about Brazilian Jiu-Jitsu and Muay Thai. Right after we met, I watched him compete in a tournament, when I knew nothing about BJJ, but I thought it looked amazing and complex. And I thought to myself, “If someone can teach me how to do that … I wonder if I can get my body to do that?”

At the time I was part of Richmond’s River City Rollergirls, the local roller derby league, and was mentally and physically growing into aggressive contact sports. Who I was, as a person and how I related to the world, was really changing at this time, and my confidence and sense of self was really developing.

I still train Muay Thai and will actually go to live in Thailand for a month this year to train and learn. But BJJ quickly took over as my love and passion, and my obsession with BJJ led me to leave derby and commit myself to my training at Richmond BJJ Academy. Eric Burdo and I are still together and, in fact, we now partner to run the gym together.

How often do you train?

Six days a week for 10 years now. Some days that’s twice a day and some days I teach more than I train, so I can moderate my own training between tough and light sessions.

First my coach made me watch “Vision Quest” and “Choke,” before my first competition.

So I watched Choke in a hotel room the night before my first tournament. Best coaching I’ve ever received!

I look back at my first tournament with so many good feelings. I had the support of all of my teammates and coaches. There was such a fun and positive environment with my team, whether it was on the mats, or on the road when we went to compete. I do laugh at the BJJ that I tried to use in those matches, but everyone needs a first, and I’m glad that was it. I think I won one match and lost one match, but I came away feeling great about BJJ and competing.

How has your BJJ evolved over time?

Absolutely my BJJ has evolved over time. I started as a guard player and over time really had to work to fill in my game. In a complete 180, I have spent the last four years studying guard passing. In that time I’ve also become an instructor and that has been such a rewarding part of my learning process. First, I love helping students who are excited about BJJ. But second, teaching really changed the way I understand BJJ and made my own BJJ better. I think differently about it now; I analyze it differently. I see and appreciate the complexity and the simplicity of BJJ.

Why do you train?

I started training BJJ as a personal challenge to see if I could do it and and see if I could become good at it. I also liked that I would develop self-defense skills. As a fiercely independent person, I wanted to know that I could rely on myself and that physical aspect of self-defense was missing from my skill set at the time.

I think that boils down to a simple answer: I love BJJ!

What’s the wackiest thing you’ve had happen while training BJJ?

I have lots of fart stories, but those are boring, right?

I do love when the kids call knee-on-belly “neon belly.” On the days when I’m tired, it helps me remember that I love BJJ and to keep things fun. 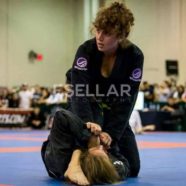